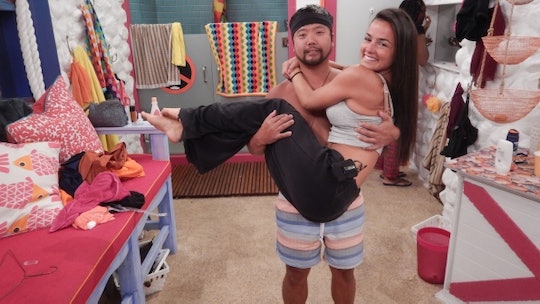 Why Did Natalie Betray James On 'Big Brother 18'? It Was Best For Her Game

Until now, Natalie and James were a shining beacon of light in the Big Brother house, but since they're both on the block, it's suddenly coming down to an every player for him or herself scenario. So why did Natalie betray James on Big Brother 18? No one really expected her to almost grovel at the feet of Victor and Paul in the Head of Household room, but on Wednesday's episode of Big Brother, that's exactly what she did. And as she slyly made mention of knowing that she would be voted off, she threw James under the bus. James, the sweetheart of Big Brother who has been her ride or die all season. Not cute.

The problem with Victor and Paul and Natalie and James started when Natalie wasted her Head of Household reign to put Victor on the block and James was the deciding vote to get him out. Then, he returned to the house with a vengeance and now he's working to exact his revenge on the showmance who was responsible for his previous eviction. So, being on the block, Natalie decided to head up to the HOH room and try to be sneaky about gaining Victor and Paul's trust back. But she did it in the worst way.

When Natalie went up to the HOH room, she shifted the blame right to James regarding betraying the two when she said, "I put my trust in the wrong hands. I really trusted James and his opinions," and as soon as she left, Paul and Victor were floored. Not so much because Natalie had told them that the reason she betrayed them when she was HOH was because of James, but the fact that she was so quick to place all of the blame on the other half of her Big Brother showmance. The same guy she has called her "soulmate" and "best friend", mind you.

So why did she do it? Why did Natalie betray James on Big Brother 18? In short, it was best for her game at this point. She's not stupid - it's obvious that soon, it's going to be down to everyone working for themselves and this is the first time this season where Natalie is in real danger of being voted off Big Brother. In order to ensure her own safety, she pulled a Hail Mary and sought the safety of the HOH room and the power couple of Big Brother, Victor and Paul, to keep her safe as opposed to James. Even if that meant throwing James under the bus and totally betraying him.

I would point out that this is likely the beginning of the end for Jatalie, but when one of them is voted out of the Big Brother house, that's going to take care of ending their showmance anyway. So either way, sadly, it was only a matter of time.