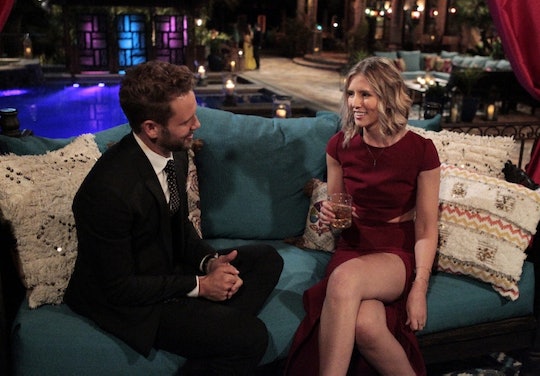 Lately, it seems like no one is safe on The Bachelor, but after Nick's own meltdown in Saint Thomas, I'm just glad that he decided to stick it out and not go home. Even though, let's be real, he probably wasn't going anywhere. Still, he's been so quick with the eliminations lately that it seems like rose ceremonies are becoming a thing of the past. And the most recent departure may very well be the most heartbreaking one yet. So why did Nick eliminate Danielle M. on The Bachelor? His decisions are becoming more important each week, as the contestants are narrowed down to the final four for hometown visits, and that's easily one of the most important dates of all for the women.

But Nick and Danielle M.'s one-on-one date in the Bahamas seemed like it started off pretty well with a romantic and pretty adorable bike ride around town as they explored Bimini. But obviously Nick felt that their connection wasn't strong enough for Danielle M. to continue on the show, because he sent her home right then and there and it wasn't easy for the contestant to handle. In Nick's own words, the couple struggled to hold an actual conversation and if you can't do that, how are you supposed to continue the relationship?

Naturally, Danielle M. was crushed since on her end there were some real feelings happening. But the bottom line is that Nick felt like their connection wasn't strong enough to warrant Danielle M. having a place in the final four when he has stronger relationships forming with the other remaining women.

It's never easy to see a woman get her heart broken after six weeks of falling for someone, but in the long run Nick has to eliminate the women who he doesn't feel something with. It's obviously going to be a tough decision no matter what, but it's always best for all involved to be honest about where you stand. Still, that didn't stop Danielle M. from being totally taken aback when Nick eliminated her during their date on The Bachelor, even if it was for the greater good when it's all said and done.

Danielle M. was the contestant who got the very first one-on-one date with Nick at the beginning of the season and since then, she's managed to stay out of drama. But it wasn't enough to build something worthwhile between the couple and Nick had to address that sooner or later. Nick would have been the first person Danielle M. took home before her late fiance, but with little chemistry between them, it probably wouldn't have been fair for Nick to continue on with her if he didn't truly feel like they had something.

Season 21 of The Bachelor has proven that the show takes a toll on not only the women, but on the Bachelor himself as well. Obviously it's all worth it to them and they have to expect some of the heartache that comes with it along the way, but Danielle M. still seemed blindsided when Nick sent her home during their date and it was a sad exchange to witness.