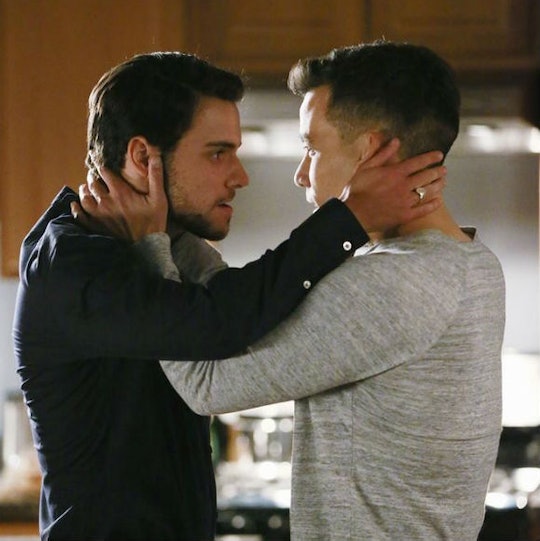 Why Did Oliver & Connor Break Up On 'How To Get Away With Murder'? It Was Hard To Watch

When Season 2 of How To Get Away With Murder left off, Oliver had crossed over the dark side. Well, kind of, in a very small way. He didn’t commit any murders or help cover them up, but he did delete the acceptance letter Connor had received from Stanford in order to ensure that neither of them had to leave. And it worked, so why did Connor and Oliver break up on How To Get Away With Murder? If Oliver was as secretive about his wrongdoings as Connor, they’d still be happily together, but even when he went ahead and revealed to his boyfriend what he’d done with the acceptance letter, and it was nothing to Connor. Apparently, honestly isn’t a huge issue when it comes to his relationships. Go figure.

But it was too much for Oliver that he’s been so secretive and deceitful to the man he loved and because of that and who he saw himself becoming, he ended things with Connor instead of the other way around. And people blowing their noses were heard around the world as viewers mourned the loss of the only good, pure, and real thing on HTGAWM, because that’s what Connor and Oliver were. Connor started off as the cocky, guarded jerk on the show and he still is to some extent, but having a character like Oliver there to keep him grounded and be his moral compass was necessary. Now he doesn’t have that and anything could happen.

The most logical situation is going to be that, somewhere down the line, Connor and Oliver are able to reconcile and get back what they had together, making them stronger as a couple and everything we need them to be. Shortly after, somehow through the fault of Annalise and the Keating 5, Oliver will be a casualty and die right after he and Connor have gotten back together. I’m not saying that Oliver will be the death we’ve been promised at the end of this season of HTGAWM, but I am saying that Shonda Rhimes isn’t afraid to kill off people we love and make us cry. None of us have forgotten George via Grey’s Anatomy or James, a la Scandal, have we?

By why break up Connor and Oliver in the first place? Their relationship is a shining beacon of light in a (literally) dark show, but when it comes to the group figuring out a murder or dodging certain death themselves, Oliver can get in the way. So for now, we’re likely going to see an even deeper brooding version of Connor.