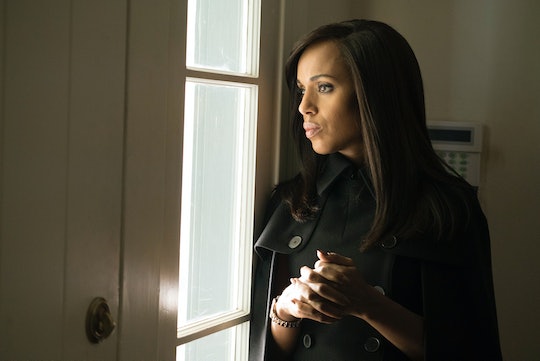 Olivia Made Some Unexpected Moves On 'Scandal'

Don't call it a comeback, per se, because I don't know what we should expect from Olivia come new episodes of Scandal in March, but on Thursday's episode she finally made strides toward being the person she once was. However, because Olivia has been in Command mode for all of Season 7 so far, you can't help asking, why did Olivia quit on Scandal? She finally decided it was time to move on from the show's version of the White House, but of course it didn't happen without a fight.

Honestly, the entire episode felt like it could have been more than a standard episode in the middle of the season. There was so much going on, it was almost hard to keep track of Olivia's motives, but in the end, it seemed like she was ready to start making the right choices again. That was likely due to Quinn's confrontation with her, which resulted in a bullet grazing Olivia's shoulder. Quinn finally showed up at Olivia's house to confront her and Olivia, who understandably looked like she'd seen a ghost, was pretty shocked at the sight of her former BFF.

But when Quinn pulled out her gun, Olivia didn't try to talk her way out of anything or lie to get Quinn to listen to her. Instead, Olivia began to show some of the humanity that she seemed to be missing all season and tried to get Quinn out of the apartment before one of the many B613 soldiers who apparently keep an eye on her took Quinn out through a window. Olivia ended up taking the shot herself, but it was a step in the right direction for her, and her resignation as chief of staff was very likely inspired by that move she made.

Could this be the start of something beautiful and good and full of white hats and purposeful walks down the hallway at QPA? I don't want to get ahead of myself here, but Olivia's resignation speech on Scandal was definitely something she might have said once upon a time and it really felt like the old Olivia, before Command and before her position in the White House.

In her speech, she said that Mellie is "the person this country needs to unite us" and that her own time at the White House was over. And as the speech ended, the lights and computers came back on in the B613 briefing room, further driving home the idea that Olivia is done with all of it now. I don't know where that leaves her exactly, but it's certainly a step in the right direction for the former gladiator.

Throughout the episode, there was a tug-of-war going on with Jake and Olivia battling to see who would come out on top as both Command and the White House chief of staff and although there were moments when it seemed like one was going to fall completely, the other would come up with something else to knock the other one down a few pegs. Then, Olivia had the chance to not only get her job back, but to make Cyrus, her sometimes partner in literal crime, the president and take Mellie out of the White House for good.

But Olivia's decision to instead step down herself spoke volumes about where she's at and where she may be going. Which is hopefully somewhere with white hats and good guys.

Olivia had the tools to keep her job and to take down her perceived enemies, but she didn't. Instead, she quit the White House and, presumably, quit B613 too, which could mean that she's slowly turning back into the person she used to be. Only time will tell if there's anything else up her sleeve.