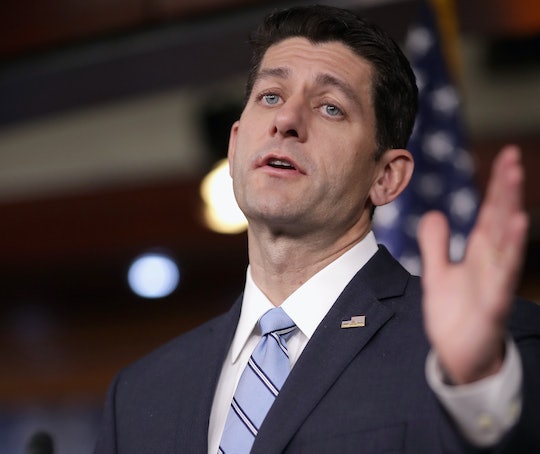 Why Did Paul Ryan Back Donald Trump? He Believes Trump Can Make The GOP's Agenda A Reality

When Manhattan real estate mogul Donald Trump drove competitor Ted Cruz out of the presidential race with his big win in the Indiana primary May 3 and effectively became the Republican party's nominee, House Speaker Paul Ryan told CNN that he was "just not ready" to support the oftentimes unpredictable and politically inexperienced candidate. Trump fired back that he wasn't ready to support Ryan's agenda, even though they belong to the same party. Each expressed an interest in working together, though, and a series of meetings followed. The two must have reached some kind of understanding, because Ryan quietly announced via an op-ed in his hometown newspaper Thursday that he'll vote for Trump in November. Considering his initial hesitation, though, why did Paul Ryan back Donald Trump?

In the opinion piece, penned for Wisconsin's GazetteXtra, Ryan readily acknowledged that he and Trump have had major differences in the past. (He previously told CNN "We got work to do" in response to a question about Trump's proposal to ban all Muslims from entering the United States, his urging to depart 12 million undocumented immigrants, and his opposition to free trade.) But Ryan also made clear that he believes that Trump would help to push a conservative agenda as president, effectively signaling that he does not care for the man's politics but believes they can both get behind Republican ideals.

After outlining exactly what those are, he threw in a Trump mention:

This month, we’ll show the country what a better tax code looks like. We’ll outline a plan not just for repealing Obamacare but replacing it with a better system, more focused on patients, choices and lower costs. We’ll offer a plan to restore the Constitution and the separation of powers that decades of executive overreach have eroded. We’ll present the ideal national security and foreign policy to keep Americans safe. We’ll show how we can reform rules and regulations so they’re spurring the economy and creating jobs, not destroying them. And we’ll offer a better way to help lift people out of poverty and into lives of self-determination.

"Donald Trump can help us make it a reality," the piece concludes. He doesn't really elaborate on how or why Trump would be instrumental in doing much besides making incredibly sexist comments and insulting Mexicans every chance he gets. In fact, he basically admits that his support for Trump is, for him, a lesser of two evils scenario, as "a Clinton White House would mean four more years of liberal cronyism and a government more out for itself than the people it serves," according to the quasi-endorsement.

Ryan is hardly the first Republican to balk at the idea of supporting Trump. Right before dropping out of the race in March, Florida Sen. Marco Rubio ostensibly joined the #NeverTrump campaign in a strikingly emotional and seemingly unscripted conversation with reporters. "There's a broader issue that happens in our political culture in this country, and this is what happens when a leading presidential candidate goes around feeding into a narrative of anger and bitterness and frustration," he said then, referring to Trump. In May, though, he told CNN's Jake Tapper that he now supports Trump, mostly because he does not want to see a Clinton presidency.

And it seems as though Ryan is throwing his support behind Trump only after exhausting all his other options. The Washington Post's Jennifer Rubin pointed out that the announcement comes only now that, because the Republican convention is next month, it's abundantly unlikely that a third-party option like Mitt Romney will enter the race. And over at The Atlantic, Russell Berman characterized Ryan's move as a "political whisper", as the piece went up online during a congressional recess and while Hillary Clinton was giving a major national-security address — almost certainly a deliberate move.

Current polling data reports that nationally, 42.3 percent of Americans like Trump, while 43.8 plan to vote Clinton in November. A lot can — and certainly will — happen between now and then, but the number are close. The idea of having another Democrat in the White House is clearly making many Republican elites sweat, meaning they're willing to support their best chance of avoiding that outcome, even if they can hardly wrap their brains around a Trump presidency, either.