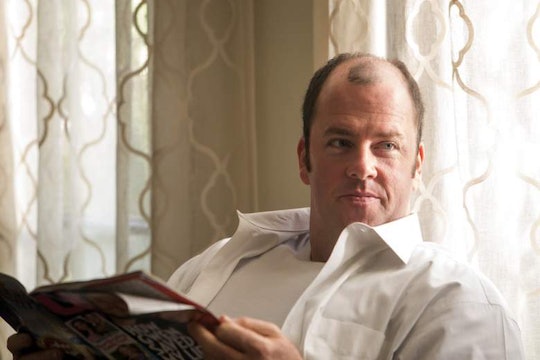 Why Did Toby Get Divorced On 'This Is Us'? Kate Met His Ex-Wife

So far, the shining beacon of light in a show that always leaves the audience a blubbering mess has been the romance between Toby and Kate on This Is Us. But what no one really expected was for them to have any relationship problems this soon, especially since the couple got off to a decent start and took off in a way that makes you root for them hard. But while he seems good on paper, why did Toby get divorced on This Is Us? For the first time, we get a view into the life he had before Kate and before he was attending overweight support groups. Incidentally, that's how he met Kate, though, so it's all good.

At the beginning of Tuesday's episode "The Pool," we see Kate and Toby on a lunch date when he gets up and Kate spots him hugging a strange woman. Mind you, this woman is beautiful and thin, and the fact that she and Toby seem so close sets off a tons of red flags for Kate. But before you can say, "Hold my earrings," Toby returns to the table, totally normal and inconspicuous. When Kate asks who the woman was, he says something to the effect of a casual, "Oh, my ex-wife," and it's like boom — bombshell.

Of course it was a relief to learn that the mysterious, dark-haired woman wasn't another woman Toby had been seeing, but the introduction of his wife brought up a ton of questions. Like, why did Toby get divorced? And what else might he be hiding? Lucky for us, Kate went to investigate things further and found out everything she could about the shop owner, even going on a faux job interview at said shop in order to talk to Toby's ex.

When she revealed to Toby what she'd done, he was understandably upset and finally explained what had happened with his ex-wife. Not only did she cheat on him and make him feel terrible for most of their marriage, but Toby's ex-wife also gets alimony from him and was the reason for his weight gain of more than 90 pounds in one year. Again, if he hadn't gained that weight, he wouldn't have met Kate, but it finally let us learn more about his backstory.

He went on to confide in Kate that during the time following the end of his marriage, he'd contemplated suicide multiple times. It was a heartbreaking discovery, but one that allowed the viewers to see Toby in a different light and for Kate to realize that she isn't the only one with pain inside of her.