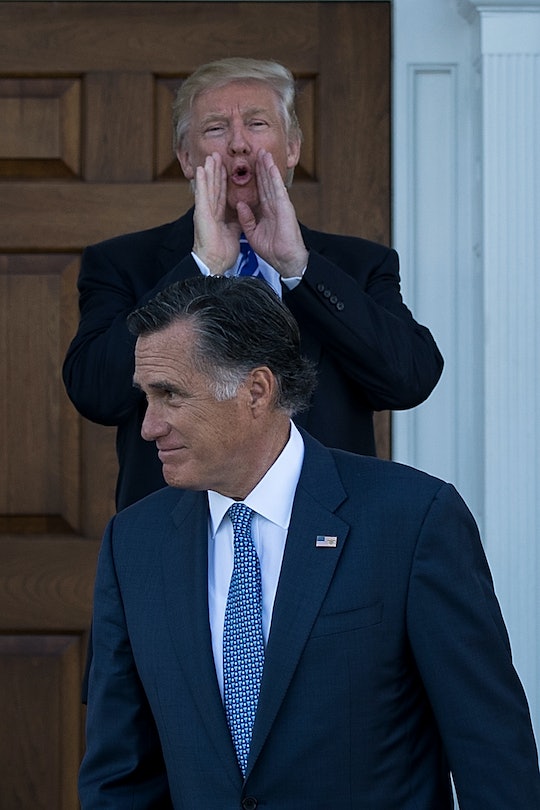 Why Did Trump Interview Romney For Secretary Of State? Adviser Claims It Was "Torture"

President-elect Donald Trump is known for picking fights with naysayers. He even has beef with Saturday Night Live. It's part of what makes him appealing to some voters. But that tendency to bark is exactly the reason why many voters wondered why Trump interviewed Romney for secretary of state, despite the fact that Mitt Romney had discouraged fellow Republicans from voting for the real estate mogul. (Romney officially withdrew his name from consideration late Monday evening.)

A few weeks ago, it looked like a job in the White House was in the bag for former Massachusetts governor. The two even had a fancy dinner at Jean George in New York City with each other, joined by Reince Priebus, Trump's new chief of staff. It certainly appeared that Romney was making his way into Trump's squad.

If the meetings and dinner weren't about a specific job, some speculated, it was a good sign that Trump was talking to a political opponent in the name of uniting the Republican party and getting Romney's advice about how to move forward once inaugurated. Romney did run for president in 2012 — he had to have some ideas up his sleeve about how the country should be run that he could offer to the newly elected businessman.

Alas, it looks like no one on the Trump transition team was really looking to get advice from the Republican insider, least of all Trump. On Sunday, Roger Stone, a Trump adviser, reportedly told InfoWars (a site that traffics in conspiracy theories) that it was all a ploy to make Romney look like a punk.

"Donald Trump was interviewing Mitt Romney for secretary of state in order to torture him. To toy with him," Stone claimed. "And given the history, that’s completely understandable. Mitt Romney crossed a line. He didn’t just oppose Trump, which is his democratic right, he called him a phony and a fraud. And a con man. And that’s not the kind of man you want as secretary of state." (Romper has reached out to a Trump transition spokesperson for comment on Stone's allegation, and is awaiting a response.)

Here's why that comment is pretty unsettling to non-Trump supporters.

Since Trump's election, he's already gone back on a few of the promises he made on the campaign trail. He claimed he wanted to "drain the swamp" in D.C., but has appointed Wall Street insiders to key Cabinet positions. Giving an "establishment" Republican (or just someone who has experience in politics) a job as important as secretary of state could make some of Trump's most fervent supporters a little nervous. It's possible that Trump was actually interviewing Romney for the gig and just decided to go another way. Even that olive-branch would seem like a weak move for Trump, who prides himself on being the best in show.

By telling the "alt-right" leaning readers (members of a movement based around white nationalism and racist conspiracy theories) of InfoWars that Trump's meetings with the establishment politicians were all just a ploy to get revenge on a hater, Stone could have been just currying favor with Trump's most active base.

If what Stone said is true, then Americans are in a bit of trouble. Sure, everyone has that colleague that they don't like but are nice to because the job depends on it. But parading Romney around as a potential candidate to head up the State Department and taking him out to dinner in front of the cameras is a low blow. What is this, a middle school cafeteria?

Remember, Trump ditched reporters for one of his first meals after being elected. There were ways to keep the subsequent meetings with Romney under wraps. Trump's campaign manager, Kellyanne Conway, told CNN that Trump supporters, and probably Trump himself, felt "betrayed" by Romney.

If Stone's comments about Romney's meetings are true, that's not a good thing. That just means Trump doesn't mind humiliating his opponents if he feels "betrayed." A Twitter rant is one thing — but mortifying someone in public for disagreeing with you is another. It's bullying billionaire-style. And that attitude can trickle down to anyone who wants to speak publicly about Trump's performance as a leader.

Even non-Trump supporters might have been a little relieved to see that he would be considering someone like Romney for secretary of state. For Democrats, Romney wouldn't be ideal — but he would be more acceptable than some of the other people Trump has already appointed or nominated to key positions in the administration. It would have been an on-script, teleprompter Trump move. And it would have been a sign that the president-elect was willing to compromise and take advice. That would be comforting and a sign of progress.

Instead, it looks like Trump is going to appoint ExxonMobil CEO Rex Tillerson to take over the State Department. Sure, ExxonMobil is a global company (with its own, expected scandals under its belt, being a mega-oil company and all) but being able to take long plane rides isn't exactly the main qualification for the job.

So, yes, it's likely that Trump tried to "torture" Romney by teasing a gig in the new administration. But that's not the kind of alleged prank a president-elect should play, especially when the stakes are so high.