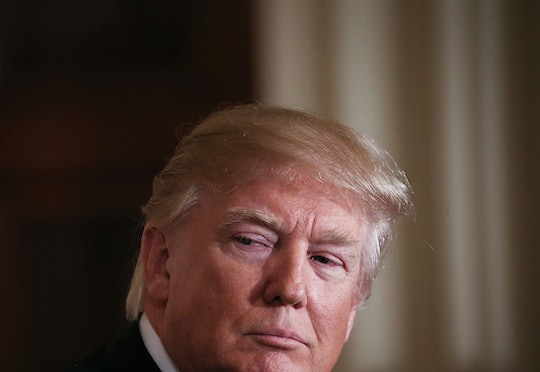 On Sunday morning, the president woke up to tweet. As usual, the series of missives he fired off presented a uniquely Trumpian blend of attacks on others, a heated defense of his own decisions, and clear reactions to the cable news he so voraciously consumes. The tweets will be subject to debate and scrutiny in the media all day long, but one question may get lost in the noise: Why Did Donald Trump sign his tweet "L"? The mysterious "L" concluded what was by far the mildest of the morning's otherwise provocative and inflammatory tweets — but, because it's Trump, it still has the potential to ignite controversy, scorn, and maybe even shake up the country's longstanding relationships with a foreign ally or two. Or it could just be a typo.

More Like This
These 20 Facts About Prince George Are Actually Fascinating
Wait, Did The Government Actually Do Something For Parents?
Bindi Irwin Has Been Sharing The Cutest Photos Of Her Daughter
A Volleyball Coach Wasn’t Allowed To Bring Her Breastfeeding Baby Into A Tournament

Trump has spent the past few days hosting the prime minister of Japan, Shinzo Abe. Highlights of the trip included one absurdly long, awkward handshake photo op and Trump's nodding along to the prime minister's speech, which he gave in Japanese, even though he was reportedly not wearing his translation headset. And on Sunday, it was time for Abe to go.

"After two days of very productive talks, Prime Minister Abe is heading back to Japan," Trump tweeted around 8 a.m., in between again calling CNN "FAKE NEWS" and bashing Dallas Mavericks owner Mark Cuban as "not smart enough to run for president." And he cryptically wrapped up the update with a single "L."

It could mean anything, or nothing at all. Twitter user and author David G. McAfee postulated in a reply to Trump's tweet that it stood for "loser." "Ever since @realDonaldTrump lost at the appeals court, he has started signing his tweets with 'L,'" he tweeted, a reference to a federal appeals panel's having upheld a temporary blocking of the president's executive order to ban travel from seven-Muslim-majority countries last month.

And Trump, true to form, had included a reference to that debacle in his not-at-all cohesive online airing of his grievances: "72% of refugees admitted into U.S. (2/3 -2/11) during COURT BREAKDOWN are from 7 countries: SYRIA, IRAQ, SOMALIA, IRAN, SUDAN, LIBYA & YEMEN," he posted shortly before 7 a.m. These, of course, are the seven countries from which the new president had originally attempted to ban travel — and appears to be a stat pulled directly from a recent Fox News report. So far, Trump is definitely losing the fight to defend the constitutionality of the ban, but it is incredibly unlikely that he would refer to himself as a loser. To get to the bottom of the mystery, Romper has reached out to the White House, but has not yet received a response.

Perhaps Trump and Abe made up fun secret nicknames for each other over golf this weekend? Maybe "L" is an inside joke between the two? Maybe Trump believes he came out on top during all those "very productive talks" and he's calling Abe the loser? Is the "L" some sort of code for Russian President Vladimir Putin, to let him know he's still Trump's favorite world leader, despite the marathon hangout sesh with Abe? Or is the president of the United States simply too harried or uninterested to proofread his tweets before hitting send?

It may take another Trump Twitter rant for anyone to ever know for sure.