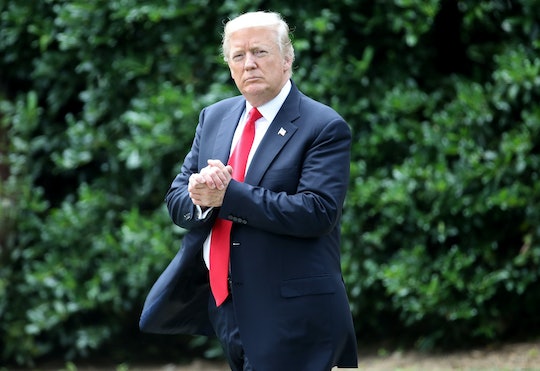 On Thursday, former FBI Director James Comey testified to the Senate Intelligence Committee on President Donald Trump's and his administration's alleged involvement with Russia's meddling in the 2016 U.S. election. Prior to Comey's testimony, news outlets and political pundits wondered if Trump would live-tweet the session given his fondness for Twitter tirades and stream of consciousness outbursts. Trump even went as far to allegedly threaten Comey on Twitter following the release of an incriminating memo, in which he said Comey "better hope that there are no 'tapes' of our conversations before he starts leaking to the press." So, why didn't Trump live-tweet the Comey hearing?

Considering Trump often tweeted late into the night while he was on the campaign trail, it's not a stretch to think he'd live-tweet the Comey hearing, especially given their now fraught relationship. In a May 2017 outburst, Trump tweeted a warning to Comey about "leaking" info about their conversations to the press. Although the tweets sent shockwaves through Washington, D.C., Trump didn't apologize for his messages nor did he make any moves to limit his tweeting in the following days.

I'm told by two WH sources that Pres. Trump does not plan to put down Twitter on Thursday. May live tweet if he feels the need to respond.

Trump himself even addressed the rumors about potentially live-tweeting Comey's hearing:

The FAKE MSM is working so hard trying to get me not to use Social Media. They hate that I can get the honest and unfiltered message out.

Now that the Comey hearing is over, Americans are wondering why Trump didn't tweet one character or covfefe during the event. Although it's a surprising move, it's actually one that makes sense, especially when you consider Trump just hired a lawyer to represent him during the Russia investigation. Now that Trump has official legal counsel on the matter, he might have been advised to put down his phone during the testimony. It makes even more sense given Spicer's message on Tuesday that Trump's tweets are "considered official statements by the President of the United States", according to Deadline. If Trump's tweets are now official statements, live-tweeting the testimony would have been especially risky.

In a statement to the Washington Post, former federal prosecutor Jennifer Rodgers said:

He's got to be careful. Any statement that he makes assuming they're authentically his statements could be used against him in a criminal proceeding. I'm sure that to the extent that his lawyers can get him to avoid Twitter, they're very strongly telling him not to say anything at all.

Although it looks like Trump didn't live-tweet the testimony, it appears his eldest son Donald Trump Jr. did. All throughout Thursday morning, Trump Jr. fervently tweeted musings on Comey, obviously upset by his testimony.

Well, it looks like the apple doesn't fall from the tree. Trump Jr. is clearly as passionate and vocal on Twitter as Trump is, the only difference between them being is that Trump Jr. currently doesn't have a legal stake in the Russia controversy. Essentially, it's more safe for Trump Jr. to tweet about the testimony than it is for his father.

Another reason for Trump's silence might have to do with his team of advisers, like White House Chief of Staff Reince Priebus, micro-managing his day-to-day activities. Priebus allegedly "modulates structured work time with the slack periods Mr. Trump craves," according to The New York Times. If Priebus is supposedly managing Trump's daytime activities, then it's possible he's nixing Trump from live-tweeting during the testimony. Although there's "no managing" Trump once he goes upstairs to bed, according to the Washington Post, his staff is able to hamper his tweeting with structured activities, aka, his presidential duties during the day.

Although it's still possible for Trump to tweet about the Comey testimony after it wraps up, it wouldn't be a legally smart move given the Russia investigation and his potential involvement in the proceedings. On the other hand, Trump is predictably unpredictable — his firing of Comey in May 2017 is a perfect example of this. It often seems like Trump is the one undermining himself, evidenced by the rash decisions he frequently makes in addition to his late night tweeting. Only time will tell if Trump has learned his lesson and decides to keep quiet this go around.