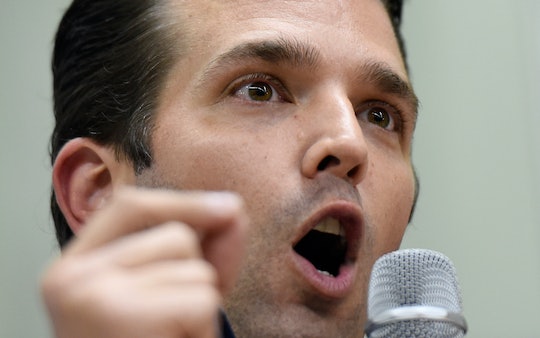 Although it was a decidedly apolitical flub, the Oscars' most awkward moment immediately garnered comparisons to the 2016 presidential election. Some Twitter users imagined a world in which Donald Trump's win had been a mistake, just as the musical La La Land did not actually win Best Picture as announced Sunday night; the drama Moonlight did. And the president's son took to Twitter as well, in an attempt to inexpertly criticize another Academy Awards gaffe through the lens of politics. Far from making his intended point that "Hollywood doesn't really care about the little people" (or something), Donald Trump Jr.'s Oscars tweet is just horribly ironic.

Trump Jr. didn't tweet about the La La Land/Moonlight onstage mixup that dominated much of the the post-ceremony coverage. Instead, he homed in on a largely overlooked error: The in-memoriam montage the Academy prepared featured an image of Australian film producer Jan Chapman, who is alive and well, having confused her for Australian costume designer and frequent collaborator Janet Patterson, who died in October, as The New York Times reported. Trump Jr. shared the article, along with his own commentary: "Interesting mistake, its almost like Hollywood doesn't really care about the little people behind the scenes... #oscars#oscarsfail," he wrote Monday morning.

The comment seems to be a sarcastic reference to the political flashpoint that is "the little people" — usually portrayed as a monolith of unassuming, hardworking blue collar Americans who didn't, say, inherit real estate empires from their own fathers that made it possible for them to amass billions of dollars of wealth, as is President Trump's situation. Partisan bickering about which political party really cares about such "everyday Americans" often shapes debates about economic policy, with the president's detractors openly critical of the idea that a man whose Manhattan penthouse is literally plated in gold could truly be a champion for the working class.

But the actual link between this political talking point and an honest slip in the Oscars montage is hard to really pin down.

More importantly, even the fact that Trump Jr. tweeted about "the little people behind the scenes" represents a blatant hypocrisy. Screenshots of one of his own previous tweets, this one from 2012, quickly began to populate his mentions. In it, the eldest Trump son wrote:

At dinner w our groundskeeper who missed his sister's wedding 2 work (luv loyalty 2 us) "No big deal hopefully she'll have another one someday" ;)

And the self-reported example of the groundskeeper is just one example of how the Trump family reportedly treats his workers. During the campaign back in June, USA Today published an investigation in which hundreds of people who have worked for Trump — including small businesses — alleged that the now-president had refused to pay them for their services. Trump has denied this, but the White House has not yet responded to Romper's independent request for comment.

And since Trump has taken office, his refusal to fully relinquish control of his business endeavors (his two oldest son's, including Trump Jr., are technically in charge now), frequent trips to his Mar-a-Lago estate, and the fact that his wife and youngest son still live in New York City — where they need Secret Service protection at all times — has cost taxpayers an outsized sum when compared with past presidents.

Also, when then-Democratic presidential candidate Hillary Clinton pointed out during a debate in October that Trump had likely not paid a federal income tax in years, he shot back, "That makes me smart." Does that really sound like a family that's looking out for "the little people," to whom, the conservative argument goes, rich people's wealth is supposed to "trickle down"?

But perhaps most ironic of all was Trump Jr.'s decision to share a New York Times article in the first place. His father is famously enmeshed in a one-sided war with the media, frequenting decrying reporting that's critical of him as "fake" and the Times in particular as "failing." And the newspaper was one of several outlets that the White House expressly barred from an untelevised press briefing Friday, drawing the condemnation of free press advocates. Twitter user @Noelle_CD called out the weak connection between the story and the point Trump Jr. was trying to make, before addressing the hypocrisy of citing the Times. "Also surprised you'd cite a news source who's not even allowed into your father's press briefings," the post, a direct response to Trump Jr.'s tweet, reads.

Perhaps Trump Jr. was just riled up at the many digs against his father that frequently come up during awards shows such as the Oscars. Oscars host Jimmy Kimmel, for example, joked Sunday that provoking Trump would prompt the president to "tweet about in all caps during his 5 a.m. bowel movement tomorrow."

He actually didn't though — but his son kept the Trump tradition of posting nonsensical, misleading, and oftentimes offensive messages to Twitter alive.