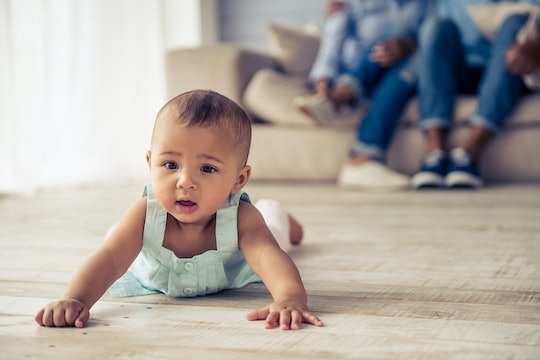 Is Your Baby Army Crawling? Here's Why That's Totally Normal

Crawling is one of the biggest milestones during your baby’s first year. Think about it: Your little one goes from being a beautiful blob sitting on a blankie to actually becoming mobile. But if you’re expecting your baby to suddenly spring up on all fours and start sprinting across the floor, think again. Babies crawl in a variety of ways, but why do some babies army crawl? Hint: It's totally okay.

Army crawling is when your baby pulls herself forward using just her elbows while the rest of her body stays on the floor. And while it can be cute to see your little cutie doing her own version of a covert military mission across your kitchen floor, you might wonder why she’s not actually crawling. And the reason is because… she’s not crawling; she’s creeping.

It’s important to differentiate between creeping and crawling, because the two terms are not synonymous. “Crawling is the act of babies moving around using their hands and feet, with their tummies remaining on the ground,” Dr. Rose Cardentey, DPT, a director of physical therapy in Florida, tells Romper. “This stage is often referred to as the army crawl.” A developmental milestone, crawling happens before creeping.

But why do babies army crawl in the first place? “Army crawling is generally seen when a baby’s upper body strength and coordination is more advanced than the lower body, which is usually the case when infants are first learning how to propel themselves forward,” Dr. Erin Nance, a hand and arm surgeon, tells Romper. “It is a natural progression from practicing tummy time and lifting up their heads.” For many babies, army crawling is a time of transition to when they can begin crawling on their hands and knees.

There are many different forms of crawling, and according to Dr. Nance, all are fairly standard. “They are just normal attempts at babies learning to progress from sitting upright at about 6 months to learning how to walk around 12 months,” says Dr. Nance. How they crawl makes no significant difference as to how they will eventually walk, as some babies skip crawling altogether and go straight to walking.

Creeping, on the other hand, “is the act of babies ambulating on their hands and knees with their tummies off of the ground,” says Dr. Cardentey. Not only does it help babies learn how to coordinate both sides of their bodies, but it also facilitates the development of abdominal, back, hand, and leg muscle growth. In short, creeping is what people commonly associate with crawling.

Even though creeping is an important milestone, some babies skip over it entirely and go straight from sitting to standing. But if your child decides not to creep, you should probably try to get her to do it, anyway. “If a child transitions from sitting directly into standing, parents should incorporate games into floor time to encourage creeping,” suggests Dr. Cardentey. Either way, most babies master the art of crawling between 7 and 10 months, according to BabyCenter.

No matter how your baby moves around, keep in mind that there are a myriad of ways in which to do it. One of my kids would crawl by swinging one leg along while moving forward with the other. Another kid would scoot on her butt along the floor. And one just rocked back and forth. As long as your pediatrician is happy with your baby hitting her milestones, there’s really no reason to worry about it. Soon enough, she’ll be totally mobile, and at the end of the day, you’ll find yourself crawling — into your bed from exhaustion, that is.