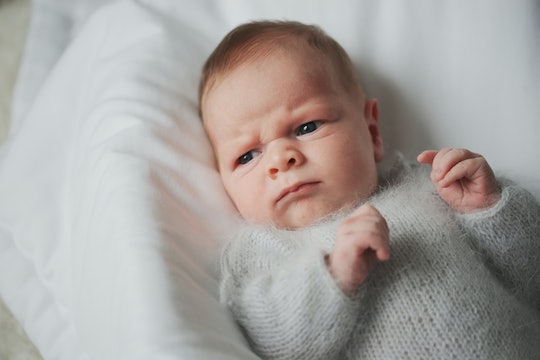 Does Your Baby Look Pissed? 6 Totally Logical Reasons For That Furrowed Brow

When you're a brand-new mom, it feels as though you could spend hours just examining every little detail of your newborn, from those impossibly tiny fingers to that sweet puckered mouth. Every movement on their face, from a wide-eyed stare to a red-faced yowl, is an absolute wonder. Then, as your baby gets older and the looks they give become more specific, you start to wonder what's behind them. One of the most fascinating — and amusing — facial expressions is that oh-so-serious one, complete with an intense gaze and a furrowed brow on your baby's face. Is your baby secretly checking you out? Or are they really ticked off that you served strained green beans for dinner?

The answer may not be what you think. Although babies don't have the emotional capacity or reasoning skills to make personal judgments, their brains aren't total blank slates, either. Scientists are learning that babies are born with the capacity to think; one recent study from Europe found that one-day-old children's brains responded differently to a "social cue," such as playing peekaboo, than to a non-social action, such as an arm moving an object, according to The Birkbeck University of London's School of Science. Other researchers have discovered, based on the length of time an infant stares at particular stimuli, that even the smallest babies may be able to understand such concepts as number quantity and the solidity of objects, reported The Guardian.

So when your little one fixes you with that serious/skeptical/annoyed look, does that mean they're working out a calculus problem? Probably not. More likely, your baby is sending you a message about something simpler on their mind. Here are the most likely reasons behind that furrowed brow.