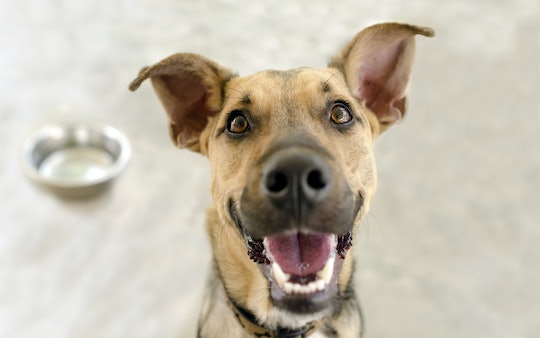 If you're a dog lover (or even just a lover of dog memes), you probably believe without a doubt that dogs can smile. Some people even swear that random dogs smile at them, personally, all the time. It's a fun idea, to be sure. And in many cases, those doggo grins do look pretty legit. Still, is everybody's favorite pet really capable of not just feeling emotions, but communicating those emotions? Why do dogs smile at you if they're not trying to show you that they're happy?

As it turns out, research suggests that's exactly what dogs could be trying to do (so maybe all those cartoon talking canines didn't distort your perception of reality as much as you thought). In fact, one study published online in the journal Nature Methods suggests that all pets — not just dogs — likely express their emotions in the same way humans do, ABC News reported. Jeffrey Mogil, a psychologist and neuroscientist at McGill University in Montreal, documented the facial expressions of laboratory mice in response to pain. What he discovered was that mice, like people, show they're in pain by contorting their faces — a finding which confirmed Darwin's theory that humans and animals use the same muscles to express emotion.

"If it works in people and it works in mice, there's no reason I can think of why it wouldn't work in cats and dogs and horses and cows and any mammal. That's sort of the point," Mogil told ABC News. "This is evolutionarily based."

Makes sense. But if all mammals technically have the ability to smile, why aren't there viral pics of beaming cows all over your Facebook feed? Perhaps dogs are known for being particularly smiley because they hang out with people more (and actually like hanging out with people, which isn't necessarily a given with other pets like cats). As dog behavior expert Victoria Stilwell told The Huffington Post, many experts believe that dogs learned how to smile from watching people do the same, or that they picked up the habit because humans reward them for smiling (whether through treats or positive attention). But this endearing skill is more than just mimicry or an attempt to charm you into throwing the ball around: When a dog smiles, it generally does mean that he's feeling good.

A silly smile can also mean that a dog wants to show you he's not a threat, according to the ASPCA's online guide to canine body language. This gesture, where a dog shows his front teeth, is known as a "submissive grin" and is usually accompanied by a "lowered head, wagging tail, flattened ears, a soft body posture and soft, squinty eyes" in addition to the smiling part.

"Teeth don't always mean aggression," the guide stated. "It is important to consider the whole body and the context to understand what a dog is saying." A less toothy grin could merely mean that your furry friend is in a chill mood, as the corners of a relaxed dog's mouth naturally "may be turned upward slightly" (his mouth will also likely be open and he might be panting, with no facial tension).

Still, not to rain on this whole dog smile parade thing, but it is important to note that sometimes what people think is a dog smile... is not. As K.C. Theisen, director of pet care issues for the Humane Society of the United States, told The Dodo, "A dog who has the open mouth, the tongue hanging out, and the wrinkly cheeks is not necessarily a 'smile' in the way we think of a smile." (And sometimes teeth do mean aggression.) But, Theisen added, "almost all mammals have some sort of facial expression that they use when they are trying to be friendly. Learning what dog's body language can tell you is super important, since a dog 'smiling' may or may not be approachable and friendly."

Whether or not they're smiling about it at any given time, one thing you can be sure if is that dogs really do have the ability to feel joy and love. After a long period of scientific uncertainty, a group of neuroscientists at last declared in 2012 that animals do have consciousness and emotions ("Duh," said pet owners everywhere). So if smiley dogs seem to be everywhere you go... chances are they like you, they really like you!