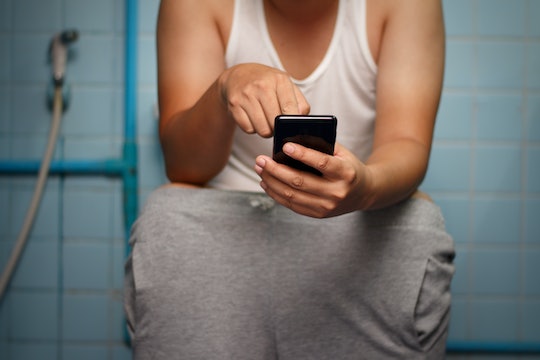 Hi Husbands, Experts Say It Does *Not* Take You An Hour To Poop & You're Just Hiding

The stereotype of men taking absolutely forever in the bathroom when they need to poop is a familiar trope that most moms will tell you is rooted in absolute truth. But why do husbands take so long to poop? Is there more to it than just endlessly scrolling through Instagram uninterrupted? Aside from the obvious bowel movement part, just what are they doing in there other than driving the rest of us crazy?

You may have seen the story floating around social media about the mom who turned off her home's Wi-Fi when her husband camped out in the bathroom for more than 10 minutes. He was reportedly using pooping as a way to skip out on baby duty. In this case, is that really all that drastic of a step to take? If your husband is spending an hour in the bathroom, should you cut off his Wi-Fi and get him off of the toilet?

"If we set aside social reasons for hiding in the bathroom, and focus in on the pathology behind why someone would be in the bathroom a long time, it comes to constipation and defecation issues," Dr. Niket Sonpal, associate program director of the internal medicine residency at Brookdale University Hospital Medical Center, tells Romper. "No one should in theory take that long to have a bowel movement. This means the person is not getting enough water, and the stools are too hard. They are not getting enough fiber, and the stools are not bulky enough."

Sitting on the toilet for too long can actually have some adverse affects, like the development of hemorrhoids, according to Healthline. While medical reasons for needing to spend more than a few minutes in the bathroom pooping do exist, Sonpal explains that most people should not be spending more than five minutes (F-I-V-E, people) on their porcelain throne.

"If you have a proper diet with good fiber and enough water intake, your bowel movements should be a very short occurrence," Sonpal tells Romper. "You should be able to sit down on the toilet (with minimal straining, if any), and within a few minutes you should be done going to the bathroom." And if this isn't the case, he recommends seeking your doctor's advice to remedy the situation.

If medically speaking, your hubby is healthy and should be finished up in a few minutes, why else would he camp out for an additional 50+ minutes? If you don't get to spend an hour pooping (because your kids are inevitably going to knock on that door when you are in there), why should he? The reason that your husband takes so long in the bathroom may not be a medical one.

"There's an expectation that men shouldn't or don't need to spend as much (or more) time in the bathroom as women, so when they do it's seen as problematic, an issue, or people might think 'something must be going on,'" psychotherapist and author Johnathan Alpert tells Romper.

Although unsavory activities could be taking place, Alpert explains that it is more likely that suspicious behavior isn't happening. "Maybe he simply takes his time with bathroom-related activities, e.g. hair, grooming, bowel movements, etc.," he says.

Your husband could easily be sucked into fantasy football on his iPad, scrolling through Twitter on his phone, or watching cats fall off windowsills on YouTube. Just like you might need an escape once in a while from your responsibilities, your husband might need the same, according to Alpert.

"Alternatively, the bathroom might be a safe place for the guy — a place we he knows he won't be asked to tend to the kids, take the garbage out, or deal with other household tasks," Alpert says. "For that moment in time, whether it is merely minutes, or many minutes, he probably feels it is a safe zone that's free of any chores."

Relationship expert Toni Coleman tells Romper exactly why this "safe zone" theory makes sense. "This can be a habit picked up in childhood, something modeled by a parent, a way he used to get alone time or avoid unpleasant family interactions or dynamics, a way to avoid work, or avoid a parent that was unreasonable and demanding," she says. "The bathroom is the one place we feel reasonably sure no one will intrude on our privacy, so it provides a great escape for someone searching for one."

Every person and every relationship is unique, so you will truly never know the "why" behind your husband's poop habits until you ask. Having an open and honest conversation about how long your husband spends in the bathroom is truly the only way to handle this frustrating situation. Or, you can turn off the Wi-Fi. Either way, you'll eventually have to talk about it.