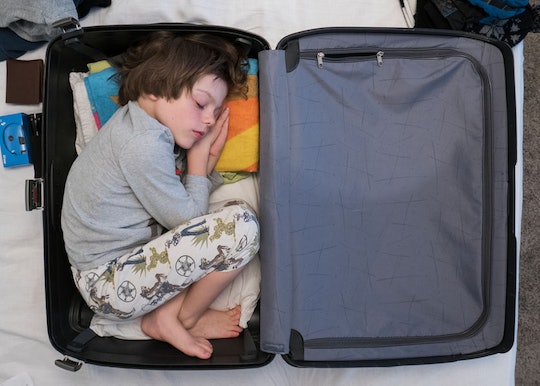 Have you ever found your kid napping in a super unusual spot? That's not to say you're ignoring your child or anything obviously, it's just every once in a while you give them some time to play and things get quiet and you realize they're asleep under the coffee table. Or curled up in the dog bed; my oldest loved that one. While it might not seem terribly concerning, sometimes you've got to ask yourself why? Why do kids fall asleep in weird places? Luckily a new study seems to have found some answers.

A new survey funded by the BBC kids' television show In The Night Garden sought to answer some questions about sleep patterns for little ones who are under five, the Independent reported. One of the aims of the survey was to figure out whether or not napping in unusual places (in other words, not in bed) was a cause for concern in small children. After surveying 1000 parents with children under five, the researchers discovered that children frequently napped in unexpected places like laundry hampers, grocery carts, and even while sitting on the potty (which don't seem terribly comfortable for napping if you ask me). In fact, these parents reported their children would find somewhere different to nap around three times per week on average. But why?

A spokesperson for In The Night Garden explained that children under five have a lot of developing to do in those years, both physically and mentally, so they're going to grab a nap wherever they want, as per The Independent:

As specialists in early years television, we know through our work with very young children that their bodies develop at their fastest between the ages of zero and five. In that short space of time they learn to walk, talk and socialize and that uses up a lot of energy, so it’s not surprising that fatigue sometimes appears in rather unusual places.

As per The Sleep Foundation, children need a whole lot more sleep than we do. On average, children between the ages of one and five need anywhere from 10 to 14 hours of sleep. Despite the fact that kids obviously need loads of sleep, three-quarters of the parents surveyed for this study admitted they had a difficult time getting their children to go to bed at a decent time, as per The Daily Mirror. Within a month the average parent reported they were able to successfully get their child to sleep in bed about seven times a month. No wonder parents reported they kept finding their kids in odd places like, as noted by The Daily Mirror:

One of the greatest things about parenting is finding out some weird thing your kids is doing is not as weird as you thought. Also a bunch of other parents are dealing with it too and this means you're not alone.

So just use these years of unusual napping as photo opps and don't worry too much, I guess.