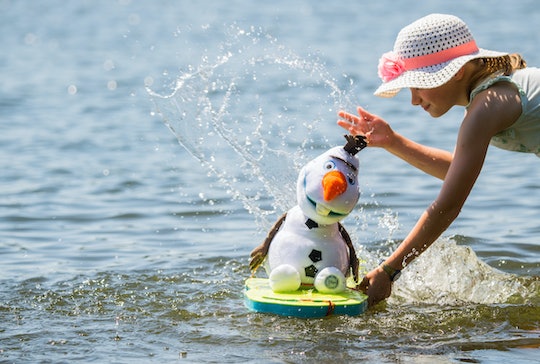 Your Kid's Love Of Olaf Goes Beyond Him Being A Funny Snowman, Experts Say

Since the beginning of pop culture, I think every kid has had a character they’re in love with. For me, it was Snoopy. I lugged my stuffed Snoopy everywhere with me. These days, I think it’s Olaf. But why do kids love Olaf so much? Is it that he's just a happy little snowman, or is there something deeper about this figment of Anna and Elsa's imagination?

“Besides being funny, sweet, and non-threatening, Olaf is basically a child,” Dr. Amy Franzini, an associate professor of communications studies at Widener University tells Romper in an email interview. “Since he is pretty much just ‘born’ during the first Frozen film, he knows even less than the child audience member. Children can relate to Olaf as a peer, but in some ways he also makes them feel smarter and more worldly because he is so naive. Sesame Street also used this tactic 50 years ago with the creation of Big Bird. Other characters would ‘teach’ Big Bird things because he was young and unworldly. So by teaching him, they were/are teaching the child audience as well.”

Licensed clinical psychologist Stephanie Wong also points out, “Olaf promotes friendship, a positive attitude, and a good sense of humor — a depiction of positive character traits that we try to encourage in children."

As far as why children just love and become attached to characters in general, Wong tells Romper, “Children love particular characters that they can relate to, and this includes both cartoons and puppets.”

“Children, like all of us, form connections with characters; this is known as a parasocial relationship. Typically (but not always) children connect with characters who are similar to themselves in some way. In childhood this contributes to their identity formation. Since Olaf is very nondescript and generic — many different types of children connect with him," Franzini says.

Does it make a difference if the character is a puppet or “real person” like Mister Rogers when it comes to how much a kid will love and covet them? Franzini says, “Many successful children’s television shows (including Mister Rogers) have incorporated both cartoon/puppets and real-life characters. This actually helps children to start to differentiate between fantasy and reality.”

But there's really no trick to a child loving a cartoon character versus a real character. Franzini says, “Typically, as a child matures, they seek out more ‘real’ characters, but people of all ages like cartoons/puppets — just look at the longevity and popularity of The Simpsons and The Muppets.”

Dr. Ana Sokolovic, psychologist and life coach at ParentingPod.com tells Romper that relatability is what makes a character so popular. "The nature of characters in the newer cartoons keeps changing, and we no longer have representations of just the extremes — characters being either extremely good or bad. For a child to be able to relate to a character, its complexity (having both of the good and bad within, but choosing the good in the end) still needs to be presented in a simple way. A child needs to be able to understand the struggles, the reasons and the choices a character makes."

And of course, "it helps if the character is a kind, funny, fluffy, googly eyes mythical creature, or a beautiful, strong, and rebellious princess, or an underdog that never gives up on their values or dreams."

So when it comes to Olaf in particular, children feel connected to his naivety, kindness, sweetness, and non-threatening disposition. Same, little guy. They also like that they can feel “smarter” than Olaf, which makes them feel more worldly. As for me and Snoopy, I’m not sure how naive he was — he was the Red Barron after all — but I am happy to have those memories of carrying him with me always and the fact that he still sleeps on my bed in my childhood home. Perhaps your kids will always have an Olaf on their bed for you to say goodnight to once they’re grown up and gone from the house. That’s the beauty of childhood characters and stuffed animals isn’t it? You never have to let it go.