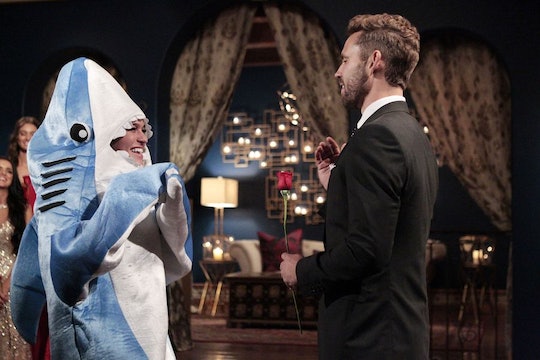 Alexis' Love For Dolphins Needs To Be Explained

Before the topic is debated any further, an "aspiring dolphin" trainer is not an official occupation, no. But sometimes you just have to give the folks at The Bachelor something creative to go on, so you can stand out, and Alexis totally has. She exited the limo dressed as a dolphin in a shark costume and stayed "in character" all night, which is some serious dedication. But why does Alexis from The Bachelor like dolphins? The contestant is from New Jersey, but recently moved to Miami, so maybe that's part of it.

At 23 years old, Alexis is one of the youngest contestants this season on The Bachelor. But because of her age, it's totally understandable that she isn't established in her chosen career yet, be that dolphin training or something else entirely. She did recently graduate from Montclair State University, where she played volleyball, but she doesn't really seem to have a history of a professed love of aquamarine life. So why does Alexis from The Bachelor like dolphins enough to make it her main schtick on the show? Even if she isn't serious about becoming a professional dolphin trainer, you have to have a certain level of appreciation for the sea animal to dress up like a shark and claim all night long that you were, in fact, a dolphin instead.

On Alexis's bio on the official ABC page for The Bachelor, she listed the most outrageous thing she's ever done as "move to Miami alone," so it wouldn't be totally crazy to assume that this seemingly newfound love of dolphins was born once she moved to the city that the Miami Dolphins call home. If Alexis was obsessed with dolphins before, there isn't much evidence of that in her social media life. Her Instagram has requisite selfies of her in the best angles, with some full body mirror shots to round things out. There are several photos from the beach and ocean, but nothing that suggests a serious career goal of becoming a dolphin trainer in real life.

Still, the whole gimmick (if that's what it is) enables Alexis to be one of the most talked about contestants so far this season on The Bachelor and she's already made it past Week 2. She even got the chance to participate in one of the first group dates, where she was able to show up, sans dolphin/shark costume, and show off her sense of humor.

On Alexis's LinkedIn profile, she lists skills and interests in the fields of marketing and communications, but there isn't a mention of a love of dolphins to hint that she's pursuing a career in marine biology. Whether Alexis loves dolphins as much as she says or not, the Bachelor contestant is already making waves. See what I did there?