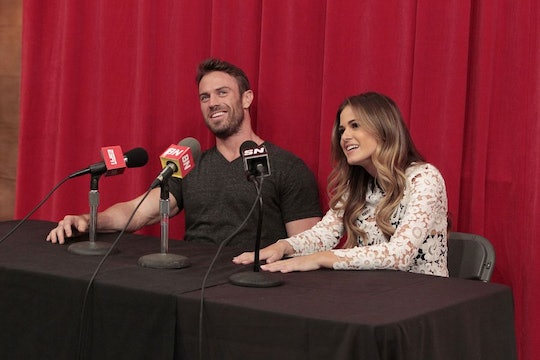 Why Does Chad Return On 'The Bachelorette'? He Still Has More Trouble To Stir Up

On the latest episode of The Bachelorette, we finally saw happen what we knew was coming, but what we were all living in denial of. Chad was sent home, given no rose, and embarked on a slow walk of shame through the darkening woods. Because, of course, he couldn't just leave like a normal person. But then he was back at the house, literally scratching a the door to get in, so why does Chad return on The Bachelorette? Obviously it's not for the cold cuts, since the new Pennsylvania house doesn't have the requisite trays of deli meats and snacks, but is it for more screen time? To get his luggage? Or, you know, maybe to just insert himself into the rose ceremony because that is so Chad and we all know it.

Let's back up for a minute here. On the June 7 episode of The Bachelorette, JoJo chose both Chad and Alex for a two-on-one date that consisted of an awkward creek-side picnic that sort of cemented Chad's fate on the show and with JoJo herself. Alex had actually already predicted the date the night before in another argument between Chad and everyone else, when Alex said, "I can promise you, tomorrow, this is gonna end for good. This energy that we all feel is gonna go away forever."

JoJo's goodbye to Chad on The Bachelorette was a quick one and easily done, especially after Chad had zero excuses for his bullying behavior with the other guys. After JoJo chose to give the rose to Alex on their picnic date and Chad wondered out loud if he was being pranked, he began his slow walk back to the house to get his suitcase and get the eff out of there. Meanwhile, the rest of the Bachelorette contestants were basically having their own going away celebration party in his honor. But then, not one to go out without some insane last ploy, Chad shows up at the house, trying to get inside.

But didn't Chad outright threaten some of the other guys, namely Alex? And wasn't Alex the one who tattled on him to JoJo? Unfortunately, Chad knew as much and announced that now he'd have to go and find Alex. To confront him, sure, but now that Chad has nothing to lose, does he plan on actually physically fighting the guy? It would definitely give him more of that screen time he seems to enjoy milking. Pun intended.

In the latest promo for Episode 5, we see JoJo crying, Chad inside the house, picking fights with the other guys yet again, and that apparently someone has locked himself in a room and refuses to come out. It would be easy to assume that when JoJo cries out, "I hate him", she's talking about our favorite show villain, but chances are, Chad's return to The Bachelorette is all about finding the guys who slandered him.

Regardless of what he plans to do once he finds Alex, the fact remains that Chad went back up to the house, whistling like a woodland serial killer, and knocked on the front door before running his hands over the glass like a madman. Basically, as to be expected, Chad returned to The Bachelorette after getting booted and now he wants one final scene.

More Like This
Blake Lively & Anna Kendrick Will Reprise Their Roles As Twisted Moms In A Simple Favor 2
'Hocus Pocus 2' Officially Has A Release Date To Look Forward To
Kate Middleton Explains Why Her Kids Couldn't Attend The Top Gun: Maverick Premiere
Ed Sheeran Just Revealed He's A Dad Of Two With The Sweetest Instagram Announcement