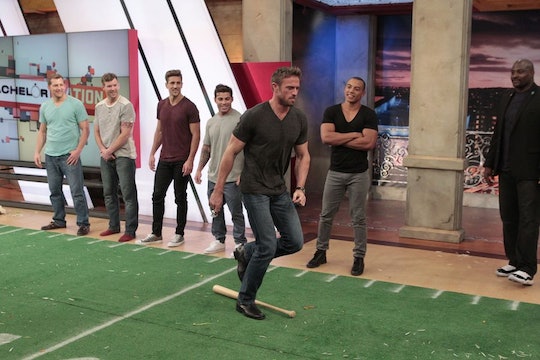 What Has Chad From 'The Bachelorette' Been Up To Since Filming? He's Actually Really Funny

The new season of The Bachelorette is just a couple of episodes in and already we have our nice guys and our not-so-nice guys pegged and picked out to either love or loathe. And that's pretty much the point, right? If they were all great guys, then it'd be a perpetual sing along (literally, in this case) and if they were all jerks, then who would we root for? Which brings us to Chad, the resident bad boy. What has Chad from The Bachelorette been up to since filming ended? It might surprise you to learn that he doesn't seem all that bad when the cameras aren't rolling. That's not to say he's playing some sort of role in The Bachelorette, but it looks like he's embracing his villain status and running with it on the show. At least for now.

In Monday's episode of The Bachelorette, we saw Chad's personality come out in full force, from basically shunning the other guys in the house, to being almost brutally honest and then kind of stalkerish with JoJo. Yet somehow he still got a rose, albeit the last one, but you know the necessary dramatics of The Bachelorette. Some might even say that the honesty Chad showed in Monday's episode was refreshing. We had the usual group of guys already clamoring for JoJo which is honestly to be expected since the whole point of The Bachelorette is to win over the bachelorette in question. And, uh, he definitely wasn't lying to JoJo about his adorable mini puppy and the apparent love affair he has with his canine roommate.

But you have to admit that the multiple JoJo sing-a-longs were a bit much and even though Chad was pretty rude with the way he went about it, he was kind of right in denying being a part of their lyric writing sessions. He's also kind of funny, with a Twitter game that's on point. It almost makes you root for him on The Bachelorette. Almost. The fact that he can make jokes right along with viewers about his weird fitness and eating habits on the show make you see him in a different light.

You don't do chin-ups with your luggage attached to you, out on the patio for all to see, if you aren't looking for a bit of attention, though. But maybe we've got it all wrong, and while looking like a jerk, Chad from The Bachelorette is actually just trying to be funny and stand out. Sure, he called out other guys on the season premiere of The Bachelorette for trying too hard to have a gimmick or stand out, but with his weird ways and brutal honesty — not to mention that really unattractive (potential) violent streak coming — it looks like Chad has his own ways to stand out from the rest of the guys on the show.

Since filming ended on Season 12 of The Bachelorette, Chad has been keeping up with his busy career as a luxury real estate agent, with the wardrobe to match, but has also taken to Twitter to be all about that Team Chad life for Bachelorette fans to get to know him better as the season goes on. As it is, on last Monday's episode of The Bachelorette we got to see a real side of Chad as he opened up to JoJo about his mother's recent passing and it gave viewers the chance to actually see him as a person and not as this house jerk that he is coming to be known as. I'm not saying he's "the one" for JoJo, but when a guy can make fun of himself on social media and be honest and open on network television, that's not the worst thing in the world, right?

If you were in the camp of being oh so sure that Jordan Rodgers had the winning rose in the bag for The Bachelorette, maybe that's not so certain now. As the guys wondered if Chad showed his cocky jock persona in front of JoJo and viewers realized that yes, he had and yes, she still wanted him, it's suddenly made things a bit more complicated for the endgame of The Bachelorette.