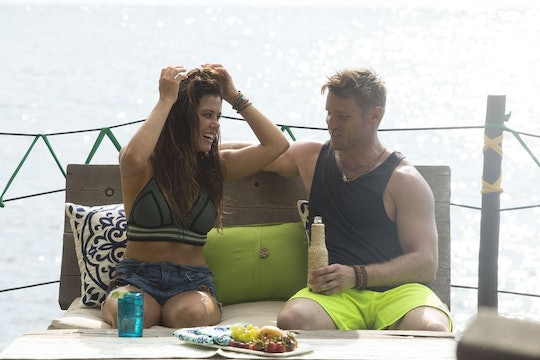 The biggest aspect to Blake E. on Rachel's season of The Bachelorette was his ongoing feud with Lucas, a.k.a. the "Whaboom" guy. But even though they were both booted from the show at the same time, it's clearly what Blake E. took with him when he left. So, why doesn't Blake E. like Lucas on Bachelor in Paradise? Because of their rocky past, it seems like he just can't let go of the idea that Lucas was never on The Bachelorette for the right reasons.

Being there for the right reasons is a common mantra by the contestants on both The Bachelor and The Bachelorette each season, so it's definitely a phrase that tends to come up a lot. When Blake E. started in on Lucas on The Bachelorette last season, though, it came from a pretty legit place. As he said on Bachelor in Paradise Monday night, from his perspective, Lucas used The Bachelorette as an opportunity to promote himself, his catchphrase, and his T-shirt business selling shirts with said catchphrase across them.

Because of Lucas' evident desire for exposure with his career, Blake E. found it difficult to trust him or believe that he'd been on the show to legitimately fall in love with Rachel.

In fact, during a recent interview on the radio show The Domenick Nati Show, Lucas admitted that he went on The Bachelorette with his career in mind. "Some people take it way too seriously," he said on the show. "I wasn't there to get the next rose, that's obviously part of it, but it's mostly about being on the show."

During Rachel's season of The Bachelorette, it was revealed that Lucas and Blake E. knew each other outside of Bachelor Nation. Long before they were competing for roses, they appeared on the reality dating series Ex Isle. The premise of the WEtv show involves couples going to a tropical island, where they agree to break up and explore other relationship options. In Lucas and Blake E.'s case, Blake E. was the single guy on the island who drew interest from Lucas' ex-girlfriend Brittany. Their episode aired in 2016, so when they both arrived at the Bachelor Mansion on The Bachelorette last season, it was a recipe for disaster.

Despite Blake E. also appearing on the show and drumming in a marching band no less, he accused Lucas of being there for the wrong reasons and apparently now, on Bachelor in Paradise, he feels the need to continue to assert his opinions of Lucas to anyone he comes across. Even though Lucas didn't also show up in Paradise this season, Blake E.'s focus is still on his Bachelorette rival. And it could very well prove to be his downfall once more.