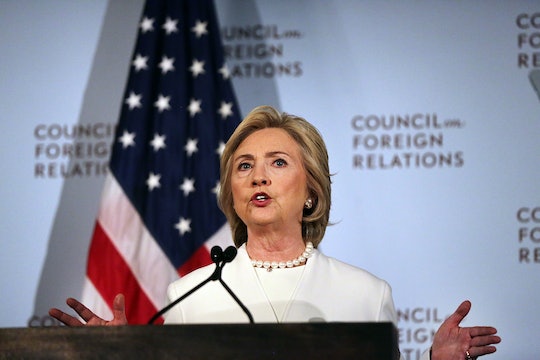 I love Barack Obama. I love Joe Biden, too. So it is with a heavy heart that I move on and prepare for our next presidential election. Most people who know me would expect me to back Bernie Sanders. After all, I am liberal to the point that I get a flush to my cheeks when people talk about socialism. (Imagine: Fully socialized medicine! The people, working for the good of the people!) I got ridiculously wrapped up in President Obama's idealism when he ran in 2008. That "Yes We Can" speech? *Fans self* But here's the thing: we've had seven years of idealism, and now I'm ready for someone who can truly get sh*t done. And when I hear Hillary Clinton speak, I know she's the one.

It's been tough facing the reality of what I feel are President Obama's limitations. His idealism when he was running in 2008 really won me over. I'm thankful for all the Affordable Care Act has done for America, but it isn't the universal system I had hoped for. Guantanamo has remained open. A lot of his idealist economic reform ideas never took root. I don't exactly blame the guy. (In fact, I'm super bitter at Congress for a lot of this.)

Obviously we can't predict if Congress and the next president will play nicely with each other. But I trust that Clinton, as a seasoned senator as well as a former First Lady, understands how to get it done. She totally kicks tail in debates. Although I love Sanders' ideals, when Clinton presents her logical, reasoned solutions to the nation's problems, I do a lot of nodding. Even with her hawkish reputation, she has totally won me over, luring me away from the far (far, far, far, far) left.

One of my son's first words was "Obama." No joke. Their Nona (my mother) worked on his campaigns, so my children have been steeped in politics from an early age. At Sunday dinners, President Obama comes up a lot. We talk about the recent local elections. There's no way my children won't be acutely aware when our next president is elected. And I'll be thrilled if that candidate is Clinton. (And, yes, while sometimes I like to pretend I'm on a first-name basis with her, I feel using her last name is decidedly more BAMF-y.)

I know how hard it is being a woman and being tough. Toughness is not a trait that women (and even girls) are taught to embrace, but Hillary Clinton has it in spades. The idea that girls aren't as assertive or powerful as boys fails when it comes to her policies. Clinton is assertive. She's powerful. When Clinton was (and let's be honest: continues to be) criticized for her cankles or her pantsuits, I want to scream. She is more than just her femininity, and criticizing her for not being eye candy is just malarkey.

She's exactly the woman I want my children to look up to (besides me, of course), because she marches to her own beat. She's not defined by her gender or its perceived weaknesses. I knew I would back Clinton during the Benghazi hearings. Seeing her correct or dispute statements made by the committee made me so proud. She wasn't trying to be easy to deal with, or polite, demure, or pretty; she was doing her job. As someone who's been trying to take "sorry" out of my vocabulary, I was pretty darn impressed.

I know that to my children a woman president might not mean much right now. Kids accept things at face value. So if Clinton gets elected, they won't make a big deal over the fact that she's a woman, just like they don't understand the importance — yet — of what it means to have a black president in office. They'll accept that she's the most powerful person in the country and move on. But for me, a woman in office will mean something. And later on, it will hold the same importance for my daughter and my son.

Clinton is the type of woman I want my daughter to look up to and emulate; a woman who has her priorities in order. My daughter may grow up to be the girliest, most feminine woman on the planet, but I hope that doesn't mean she feels like she needs to get out of the way of men's ambitions. Or she might choose not to emphasize her femininity; and in that case, I'll be glad she'll have so many important women to look up to who are valued for way more than their looks and compliance.

I'd love it if Clinton's face is included on posters of U.S. presidents that will grace the walls of my daughter's classrooms. I'd love for my daughter to see someone who looks like her looking down on her. I'd love it if my daughter had someone standing up for her right to be a woman — not out of policy or because it would win votes, but solely because she understood.

Clinton's also a woman I want my son to see, because I don't ever want him to turn into a mansplainer that habitually underestimates women. The more powerful and assertive and tough women he sees, the better. And if Clinton is elected, we'll be seeing a lot of her. I hope my son always realizes the privileges he receives just because he's white and male. I hope that when he works with, interacts with, and shares the planet with women, people of color, and other marginalized people, he respects them and values them for their different viewpoints and for their individual strengths.

I'm not saying that a tough woman being elected president will guarantee that, but it sure is a step in the right direction.