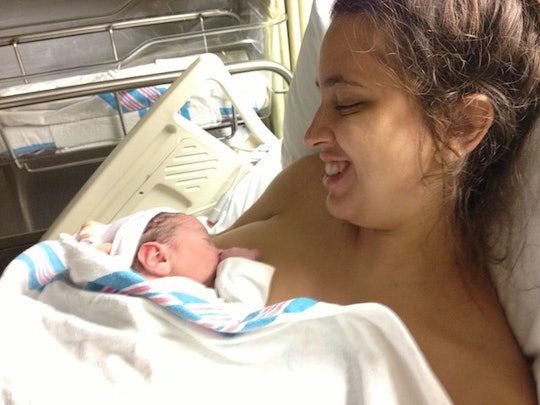 Why I Always Ask For My Son's Consent Before Hugging Him

It was the day after Thanksgiving. I was visiting my son Leo, the awesome little boy I placed for adoption with a gay couple four years ago. Because I always ask for Leo's consent before I touch him, kiss him, or give him a hug, I asked him, “Can I give you a kiss on the head?” Leo looked at me and shook his head.

“You can just do it," his father said, smiling.

“That’s true,” his father said. “We’ve just been explaining consent to him because we were telling him why we don’t like Donald Trump," referring to Trump's boasts of grabbing women's bodies without their permission.

At this point, Leo had made his way across the room and yelled back at us, “I DON’T LIKE DONALD TRUMP! I LIKE CLINTON HILLARY!”

I looked at Leo’s papa with relief. “Good job,” I said.

With Leo, I always follow one simple rule: ask before you touch. I don't do that just because of Donald Trump, of course. I do it because I want our relationship to be as much on his own terms as possible. I want him to know that he doesn’t owe me anything, least of all physical affection. I want to normalize consent for him as much as possible. And I want him to know that his touch is his to give, not other people’s to take.

Asking Leo for consent before giving him a hug might sound simple, but it's not always so simple for me on an emotional level. Leo is 4, and sometimes 4-year-olds say “no” for no reason, other than that they feel like being contrary. So sometimes, when I see my son, he doesn't hug me at all. I’ll be honest with you: that hurts like hell. Nonetheless, I just have to suck it up, because I want to teach him that hugs are his, to give or not to give.

I don't think children should ever be forced to touch people they don't want to touch, even if that person gave birth to them.

I don't always strictly adhere to the verbal consent rule. If we’re playing around and he’s already initiated physical contact with me, I don’t ask before every single touch: for instance, if we’re crawling around on the ground acting like kitties or puppies and he head-butts me, I might just ruffle his hair or kiss the top of his head. But for the most part, I'm strict about following my rule, especially for greetings and goodbyes. That's because I don't think children should ever be forced to touch people they don't want to touch, even if that person gave birth to them.

Another reason I started asking Leo for consent before hugging him was because for a while, he wasn't initiating physical contact with me, and I wanted to make sure it was OK with him if I initiated with him. But in the past few months, he's been initiating way more physical contact than he ever used to, which makes me super happy. The day after Thanksgiving, when I visited Leo and his dads, he stood at the top of the stairs shouting “MARIAH, MARIAH, MARIAH” and then launched himself against my stomach, throwing his arms around me. On another visit, he asked me to drag him around the floor by his armpits while he giggled uncontrollably. Every so often he’d say, “OK, stop,” and I would; then he’d say, “OK, do it again,” and I’d start it again.

I treasure these moments. I live for them. But I won’t force them on him.

I have personal reasons for feeling so strongly about this. As a sexual assault survivor, I feel that parents should be consistently having conversations with their kids about consent. When children are forced to, say, hug relatives against their will, it teaches them that their desire not to touch or be touched doesn't matter, and I mourn for that. I mourn for our country, which is about to be run by a man who boasts about having sexually assaulted women. And I mourn the horrible example his behavior is setting for millions of children. Asking my son if it's OK to make physical contact with him feels like the least I can do to counter that.

As I put on my coat and prepared to leave the day-after-Thanksgiving party, I asked Leo if I could give him a hug good-bye. He was engrossed in watching Detox’s “This Is How We Jew It." “I’m watching the video," he said.

Without taking his eyes off the screen, he stuck his arms straight back behind him. I smiled at his ingenuity; we could all have what we wanted. I hugged him from behind, with his full permission, and then I went home.