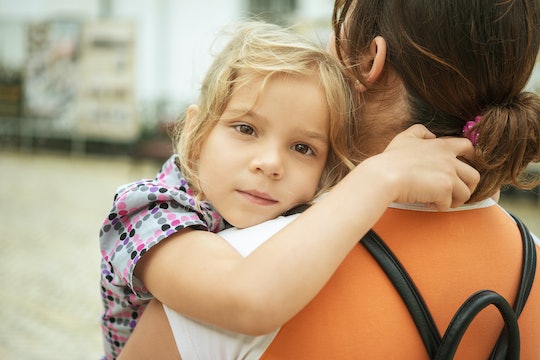 It's happened to every mother I know. You're grocery shopping or at the mall or playground and your child (or, more likely, children) are in full-on beast mode. Not even necessarily in a Hulk-like rage, just loud and vibrating with energy. You are entirely absorbed in trying to get them to stop acting like chimps attempting to escape the zoo when, seemingly out of nowhere, you hear it. "Boy, it looks like you've got your hands full." And up from the depths of your mom heart comes the silent response: "No sh*t."

"Yes, stranger, I've got my hands full. Thank you for that very insightful, very necessary observation in the middle of my child's tantrum. This has been most helpful." A lot of moms I've talked to said it's one of the worst things they can hear out in public with their kids. (And, by the way, the more children you have the more likely you will be to hear this phrase, and with less cause. If you have one child you'll probably only hear this if they're kicking up or acting particularly silly. But if you go anywhere with three or more children in tow, no matter how well-behaved they are, you'll just have it randomly shouted at you.) I get it. In fact, at times I've been tempted to respond, "Yup. So are you just going to stand there making comments or are you going to come help me?"

But I've held back. Why? Well, because honestly I'm not offended when I hear this. In fact I can usually respond with a genuine smile.

Sure, as a parent it's tough to know that the fact that you're flustered and floundering is easily noticeable. It can be irritating when people attempt to pull you out of parent battle mode (not to mention literally impossible to engage with them in any meaningful way). Maybe it feels like these casual observers are mocking you. Maybe it even feels like they're somehow taking your child's side. Maybe, you think, they think your suffering is a source of entertainment for them and they don't appreciate just how much you're struggling. I understand it can be taken all these ways (which is why I don't say it), but I just don't think it's meant in any of those ways, not even subconsciously, in the vast majority of instances.

So those overly-chipper "looks like you've got your hands full!" is not (usually) judgment. It's a poorly-timed, perhaps tone-deaf attempt at empathy and encouragement.

Personally, this is something I hear mainly from older people who, statistically (and this has been established by subsequent follow-up conversations in some cases) are probably parents of little ones who grew up a long time ago. They see you wrangling your child/children and something tugs at the back of their brain. Sure, it's been a while, but they can still feel, deep within their bones, something of what you're feeling. They've been there. Sure, the memory may be seen through rose colored glasses, but, just as smell can trigger memory, so too, I'm certain, can particular aspects of parenting. I've only been a parent for a little over six years, but I can tell you here and now that long after my children are grown, all this mommy goodness will not go away. Even if I wanted it to, there's just no way it can be erased. Not completely. Oh, there will be certain things that fade and times and best practices will change enough where my kids will probably, at some point, complain about me being hopelessly out of touch. But becoming a parent is like getting a tattoo on your brain: even if it fades and blurs, it's there forever.

So those overly-chipper "looks like you've got your hands full!" is not (usually) judgment. It's a poorly-timed, perhaps tone-deaf attempt at empathy and encouragement.

We live in an era, and maybe we always have, where parenting is often a performance. Social media has allowed us to hand-selected the moments we present to the world. When everyone does this, it (understandably) influences what we believe parenthood "really" looks like. Needless to say, we pick the moments that make us and our beloved monsters look good, and who could blame us? The nitty-gritty is boring or disheartening or just makes us look like an inept mess. Highlighting the good stuff can be an act of self-preservation. But sometimes things get out of hand and we actively suppress the messy stuff. Even those who attempt to show that "motherhood is messy" can often find themselves falling into an established paradigm. Where even the "realness" is posed, artfully disheveled, and flattering. But parenting is supposed to look effortless, controlled, and, frankly, Pinterest-perfect. So when someone tells us "it looks like you've got your hands full" we hear "we can see you're struggling unsuccessful despite your efforts" which, in a time of serene Instagram mothers, can basically feel the same as "you're failing."

There are days that I can't bear the weight anymore and I give up trying.

But you know what? You're damn right I've got my hands full. Super-full. I'm not going to be sorry about that, much less try to hide the fact. There are some days that my hands are so full I drop everything despite my best efforts. There are days that I can't bear the weight anymore and I give up trying. I throw it all down in frustration and let my kids watch an extra couple hours of TV before microwaving them some leftover macaroni and cheese for dinner and counting down the minutes before I can put them to bed. This is bad enough when it happens in the privacy of my own home, and it's even harder when you're out in public, feeling as though you're failing in front of an audience.

But real life can't just happen in our private moments: real life happens in public and it's time we admit, without shame, that we all have our hands full. The parents who came before us know this. I get that it can be frustrating to hear someone blithely stating the obvious when you're neck-deep in maternal realness, but what I've realized is that it's their awkward way of letting us know "Solidarity, mama. Been there. It sucks. Chin up."

More Like This
I’m Getting Dual Citizenship For My Jewish Children, Just In Case.
Tips For Apple Picking With Kids
Searching For Home As A Lifelong Renter
Home Reno Culture Makes Me Feel Like I Live In A "Before" House