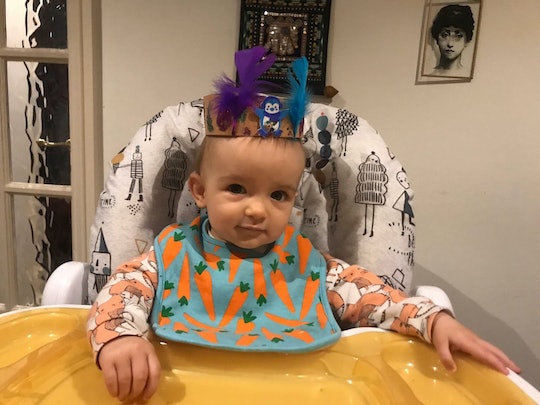 Although my 1-year-old daughter is lucky to have a sizable assortment of toys, I can't say that I've frequented actual toy stores very much since her birth. It's not that I have a problem with the baby dolls, miniature monster trucks, kitchen sets, tool boxes, or singing teapots to be found there. Rather, I take issue with how they're all usually marketed — which is precisely why I won't be buying my kid gendered toys for the holidays.

In my experience, dolls, kitchen sets, and singing teapots are often pink. Their boxes feature smiley little girls in similarly rose-colored ensembles. The monster trucks and tool boxes, on the other hand, often sit in the "boy" aisles. Cool little dudes decorate their packaging while rocking blue, green, black, gray, or red ensembles.

Girls are sold the home-wear-inspired play things; the toys that teach them how to become caretakers or how to vacuum the rug. Boys get all things practical, like toy screwdrivers or Legos. They learn how to build things and make things, while their female counterparts pick up tips on how to clean up the resulting mess. It actually feels, for all our progress, that things have gone backward in the past four decades. Watch an old Fisher Price commercial from the '70s, and the boys play with little figurines, and the girls wear corduroy pants.

I'm not about to get rid of my kid's toys, of course. Luna loves her very pink tea set, for example. The pot sings a little tune about the merits of matching your tea to your cake (what?) and she enjoys pretending to take sips out of the cups. Equally, she finds smashing her trucks together or spinning their very fast wheels lots of fun.

Nonetheless, I'm not buying into the gendering of toys this holiday season. I'll welcome whatever gifts she receives from her rellos with gratitude, of course, but I won't personally feed into the message that, as a girl, she is somehow "supposed" to play only with Barbies or flowery plates and cutlery.

Now, look: I'm not saying that everyone who buys your daughter a Barbie or gifts your son a tool set is intentionally trying to condition your kid into assuming traditional gender roles. They're probably not looking at your little girl and thinking, "She'll make a great housewife someday," just because they buy her a toddler-sized kitchen. Nor are they likely thinking, "He'll make an excellent bread-winning alpha male," if they give your son a toy laptop, calculator, or briefcase. I don't believe that toys alone are responsible for the perpetuation of the gender binary, nor is every single individual who's buying them.

I do, however, believe that toys can contribute to the endurance of these norms. This is why Luna's toy box is full of cars, dolls, stuffed animals, tiny tools, and tea pots. When I'm asked for present ideas for her, I try to mix it up. I send my friends and family links to toys or clothes from both the "boy baby" and "girl baby" sections of my favorite retailers.

Ultimately, I want Luna to know, from an early age, that all of her interests are valid — whether they're historically thought to be "male" or "female" interests — and that she is entitled to explore any hobby, field, or career of her choosing as she grows up. I don't want her thinking that she's limited to cooking, care-taking, or becoming a princess (as toys marketed at little girls may suggest). There's nothing inherently wrong with any of those activities, but the imposition of them is certainly irksome.

Music-related gifts, for example, still seem to be marketed towards children of all genders. Luna's main gift this year will be a wooden table featuring a small xylophone, drum set, and maracas. I'll also happily buy her books. Although some kid's stories definitely have male or female audiences in mind, most are meant to be enjoyed by all. I'm pleased that music and literature — two bringers of utmost joy and wonderment — haven't been too co-opted by gender stereotypes in the toy community.

Ultimately, I'm doing this because I'm already tired. Only a year into raising a little girl, I'm exhausted of how inescapable certain ideas of girlhood and womanhood already are in her life. Some folks have body shamed Luna right in front of me, chastising her double chin or not-flat stomach. Others have found it hilarious that she's a good eater because I myself am plus size. "Aren't you worried she'll be too much like you?" Others still have bought her pink on pink on pink outfits, so she can look like a "real-life doll."

I don't need her to look like a "real-life doll," though. I don't need her to show an interest in baking or mopping. I don't care if she'd rather play with Tonka trucks than tea cups. I just want my daughter to be happy — and I think there's happiness to be found in instilling the belief that she can explore anything that fascinates her. That she can wear anything that fills her with warmth, comfort, and confidence. That she can work hard towards becoming whatever it is she wants to be, whether the occupation has historically been dominated by men or women.

I want her to know that gender roles don't define the person she is, or the person she will become. Maybe it's a lot to wish for. Maybe buying her "gender neutral" toys won't make much of a difference, one way or the other. I have to hope that small actions do make a difference, though. I have to hope that the messaging my husband and I share within the household teaches her that the best gift she can give herself in this life is simply to be herself. Whether that looks like a person who loves pink dolls, blue trucks, black tool kits, rainbow animals, or anything in between.