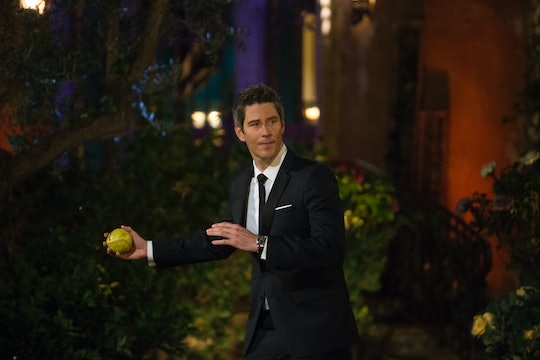 Arie's Nickname Says A Lot About Him, 'Bachelor' Fans

If there's just one thing Arie Luyendyk Jr. is known for in Bachelor Nation, it’s his kissing prowess. Fans might remember him from Emily Maynard’s season of The Bachelorette almost six years ago and that’s where he got a certain, ahem, reputation for his kissing and even earned a memorable nickname. So why is Arie called the Kissing Bandit? The nickname was earned in a way that you'd probably imagine. When he was a contestant on Emily’s season, he was simply that good at sneaking in kisses, however expected or unexpected they were. In fact, his skills have even inspired video compilations on YouTube of his best makeout sessions and kisses.

I know, at this point we’re all basically back in junior high, but even though Arie didn’t end up walking away from Season 8 of The Bachelorette with a fiancée, he did leave with a nickname in Bachelor Nation that he’s since been unable to shake. Honestly, though, more than just sneaking in kisses, Arie proved himself to be good at kissing period, and that was just with Emily. I can’t imagine the season ahead and all of the impending makeout sessions that are sure to transpire as he and the contestants travel internationally and likely fall in love.

Arie’s kissing skills are so famous in Bachelor Nation that he even appeared on Sean Lowe’s season of The Bachelor to give him tips. There’s obviously going to be a lot of kissing from the Kissing Bandit himself this season, so naturally, he recently spoke to Entertainment Tonight about his tips for kissing. "Always have good breath," he advised. "It’s all about timing and you have to know that the other person wants to be kissed." He also said that chemistry is extremely important and a big factor for him, which is only natural.

Judging by all of the kisses in the Bachelor Season 22 promo alone, it’s safe to say that Arie ends up finding chemistry with a lot of the women vying for roses and time with him this season. So I fully expect the return of the Kissing Bandit as he switches gears from being a contestant to being the Bachelor himself.

Fans who remember Arie and even those who are just not getting to know the former Bachelorette contestant are likely looking forward to seeing him practice his kissing skills on TV again. And since having chemistry and passion with your future spouse is legitimately important, then it’s basically essential for Arie to continue being the Kissing Bandit during his time on the reality show.

Shortly after the announcement came naming Arie as the next Bachelor, he went on Good Morning America and admitted that "with the right woman," he can still be the Kissing Bandit that fans know and love. He said that as long as he finds real chemistry as he did with Emily, there’s no reason viewers won’t see more kissing from him this season. But he seems totally serious about really finding lasting love, Kissing Bandit nickname aside.

The 36-year-old former race car driver and real estate broker seems to be in the right place in his life to settle down permanently with a woman, and there’s no reason to think that that woman won’t be whoever he proposes to during this season on The Bachelor. But, of course, that comes at the very end of the season and many kissing sessions later. So for now we can all sit back, relax, and enjoy seeing him put those skills to good use.