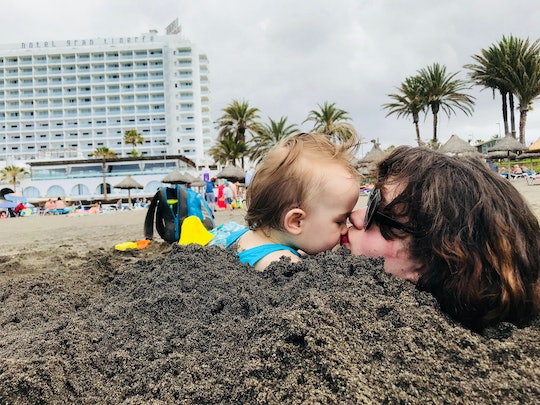 Why Is "Mama" The Last Name Your Baby Learns?

There is nothing quite like hearing your baby say "mama" for the first time, or "mommy," "mom," "ma," and any derivative thereof. I still remember when my daughter, Luna, looked up at me with wide eyes and open arms. A crisp "mama!" escaped her tiny lips as I thought, "This is it. All the sleep deprivation and lack of me-time is worth it for this one moment."

My heart was full of bliss for approximately 30 seconds, until she started screaming that same "mama" while pointing at a canvas print of three cows, the bottle of water on the bedside table, a musical book, a pillow, and a basket of plastic toy food. Soon, everything was "mama," unless it was "papa," "bebe," "agua," or "bubble." These words, she seemed to understand fully.

Many parents similarly report that "mama" is among the last names their babies learn — often after "dada," "cat," "cheese," or other favorite foods and friends. Scrolling through the parenting forums on What To Expect or Mumsnet yields countless tales of mothers who are desperate for their 1-year-olds or 18-month-olds to say "mama": To get them to acknowledge the person they so often spend the most time with. The person who so often carried them. Or who dreamt up their existence years before actual conception.

Although my daughter can say "mama," I do find myself wondering why she doesn't seem to "get" it. Why is my name, as she knows it, the last one she's learning, despite the fact that we are essentially glued at the hip at all times?

According to The Bump, "It’s a common belief that babies naturally say 'dada' before 'mama.'" As Danelle M. Fisher, MD, FAAP, chair of pediatrics at Providence Saint John’s Health Center in Santa Monica, California, told the publication, "It’s not that they love dada better, but it really is the function that the ‘d’ is easier to say than the ‘m.'"

Dr. Ben Ambridge, a professor of developmental psychology at the University of Liverpool who focuses on children's first language acquisition, feels similarly. "I think it’s probably a pronunciation thing more than anything," he tells Romper. "Ma+Ma is one of the first things kids can say, which is why many different languages 'chose' it (or something similar) as the word for 'mother.'"

Referencing my daughter or other babies and toddlers who use "mama" as a descriptor for most things, he adds, "She probably says 'mama' for everything just because she can say it. She probably knows full well what it really means. For example, if someone says 'give it to mama,' she would probably give whatever it was to you, rather than to her grandparents, a dog, et cetera." This, I could not argue with.

Gina Posner, MD, a pediatrician at MemorialCare Orange Coast Medical Center in Fountain Valley, California, also told The Bump that sometimes our babies simply repeat the sounds they most like. “Some kids are really obsessed with the ‘da’ sound, and others like the ‘ma’ sound,” she said.

Chances are that if your own baby hasn't yet mastered the word for "mama" or "mommy," it's down to finding other syllables like "ba" or "da" physically easier to pronounce, and therefore preferable. Or, if they're anything like my kid, they might be calling everything "mama" just because they can.

If I stop to truly analyze Luna's habits and behaviors, I can't deny that she takes great pleasure in her abilities, particularly upon first learning a new one. Over a month into walking, she still laughs her little head off whenever she runs around the house. When she figured out how to take off her shoes, it became nearly impossible to keep them on her feet.

Perhaps her repeated utilization of "mama" is, like Dr. Ambridge suggested, simply a product of her abilities. She can say it now, so she says it around the clock. If pushed, though, she'll almost always come to me when asked to give her mother a cuddle.

This isn't to say that it won't sometimes sting when Luna calls me "mama," only to then refer to her stuffed doll as "mama," too. We put so much of our time, energy, hearts, and souls into raising our little ones, that we often cannot help but crave some kind of emotional reciprocation. We want to be reminded that we're loved, too. That we are cared for, because we care so much.

As with so much of parenting, however, seeing and hearing our children develop language can be a test of patience. Every child is different to the next. Every child will learn to speak at a different pace, and every child will pick up different words at different times. We need to remember that they aren't trying to spite us if they cannot call us by our chosen name. They aren't trying to hurt us, or make us feel less than a "dada" or a "dog." They're just figuring things out, one barely coherent syllable at a time.