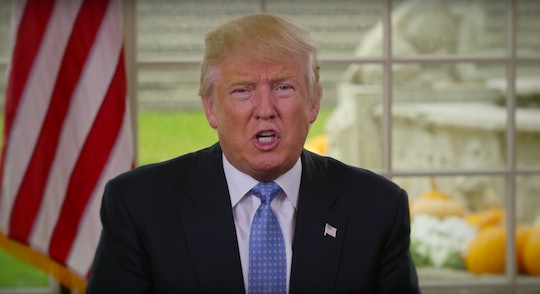 Trump Is Determining The Fate Of Obamacare

Donald Trump has the support of his fellow high-ranking Republican politicians as he pursues his quest to repeal President Obama's signature health care law. There's no question that the conservatives in the upper echelons of American government will work to eliminate the 2010 law that made health insurance accessible for tens of millions of the previously uninsured, but what's less clear is how — or even whether — they'll replace it. And to discuss the fate of the Affordable Care Act is almost certainly one of the reasons why Trump met with a group of health care executives at his Mar-a-Lago estate in Florida Wednesday.

One of the attendees, neurologist and Mayo Clinic CEO John Noseworthy, released a statement during the meeting explaining that Trump had invited him to "share his perspective on the future of healthcare delivery, research and excellence," according to The Washington Post. The rest of the group of medical professionals who visited with the president-elect hail from such prestigious institutions as Johns Hopkins Medicine, Partners HealthCare, and the Cleveland Clinic.

Some of the men in attendance have been critical of the ACA, more commonly known as Obamacare, while at least one has warned against depriving the 20 million who use it from the vital care it brings them. Trump, for his part, has slammed the law as an "incredible economic burden," likely because taxes on the wealthy subsidize coverage costs for the sick and the poor under its auspices.

Noseworthy himself evidently recognizes some of the same perceived flaws in the system that Trump does (according to Trump's campaign website, those are "runaway costs, websites that don’t work, greater rationing of care, higher premiums, less competition and fewer choices"). In an interview with The Washington Post in November, Noseworthy stressed the importance of repealing and replacing the law, and urged lawmakers to consider the quality of patient care when exploring alternatives, arguing that Obamacare restricted access to health care when it made the insurance more readily available because health plans control costs by limiting which doctors and hospitals patients have access to. "How can you have a great country if our citizens can't get access to world class health care?" he said at the time. "It's actually not a bad time to reassess."

Trump has insisted that he would retain only the popular aspects of Obamacare, such as the mandate to insurers to cover people who are already sick, while getting rid of the ones to which Republicans object. But, as Vox's Alvin Chang explained, no longer requiring all people to purchase health insurance and eliminating the taxes that make up the subsidies to make that possible would cause the entire system to collapse.

And for Dr. David Torchiana of Partners Healthcare, who was also present at the meeting Wednesday, the careless dismantling of Obamacare would be a disaster — also he does believe that recognizing that improving the system would be a complex task and tackling it as such could be beneficial, as he told The Boston Globe in November:

De-insuring 20 million people, many of whom were probably Trump voters, is a pretty difficult thing to do politically. Figuring out what the pathway is to altering the ACA and doing so in a way that actually doesn’t increase the cost of health care is pretty difficult. There’s not a simple policy solution to it.

Trump's election set off alarm bells within the medical community and among populations that are vulnerable when it comes to accessing quality health care. For example, the Globe reported that the hospital industry opposes the intention — championed by House Speaker Paul Ryan — to repeal Obamacare, and the World Health Organization urged Trump against it this month. Prior to the implementation of the Affordable Care Act, insurance plans rarely included coverage for prenatal care and childbirth, according to NPR, and a repeal or even replacement could mean reverting back to that. Women could also once again be charged more than men for health insurance.

"Our concern is going back to a world where insurance companies are writing their own rules again, and returning women to those bad old days in health care and losing all the progress we've made," Gretchen Borchelt, vice president for reproductive rights and health at the National Women's Law Center, told the outlet in November.

Trump's nominee for the position of secretary for health and human services, Georgia Rep. Tom Price, further exemplifies his vision for the future of health care in this country. In addition to being a vocal Obamacare detractor, Price is particularly opposed to the component of the law that requires insurers to provide birth control coverage and, like incoming Vice President Mike Pence, really wants to defund Planned Parenthood. He's also a threat to low-income people, as he's championed plans to offer less assistance to people with preexisting conditions and wants to fully reverse the expansion of Medicaid.

Each day offers another glimpse into the reality of what the Trump presidency will look like. When it comes to health care, the situation seems more and more dire for some as time goes on. Even for those who accept the flaws of Obamacare and wish to work to remedy them, the specter of a full repeal of a replacement that would be especially harsh on women, low-income people, and other vulnerable patients looms.