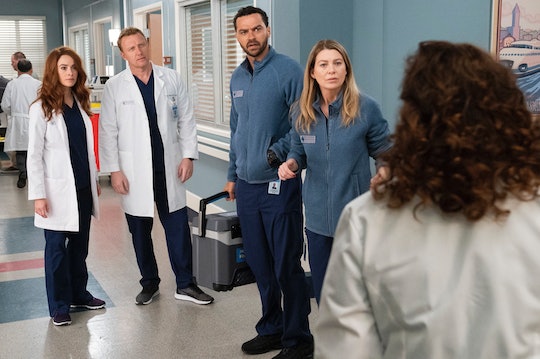 After a long winter break, Grey's Anatomy returned in January with months of uninterrupted episodes and it was glorious. Now, however, just when things have started heating up between Meredith and DeLuca and Amelia and Link, the show had to up and take another break. Luckily, it’s just for this week, but fans are no doubt going to wonder why Grey's Anatomy isn't on tonight and when the ridiculously good-looking doctors of Grey Sloan Memorial Hospital will be back.

Luckily, you won't have to wait longer than a week to have Grey’s Anatomy and even Station 19 back on your TV screen because tonight’s regularly scheduled programming is going to be interrupted by the 2019 NFL Draft special. The official draft lasts from tonight until Saturday April 27, which means that Grey’s Anatomy will be back next Thursday to end the season with the first of three more episodes until it's over.

Grey’s will be back again on the same time and channel in the fall, but you have to expect that these final few episodes of Season 15 are going to be nothing short of epic. It’s the Grey’s Anatomy way, after all. They might not be explosive device in a patient or ferry ride mass casualty level of epic, but I’m sure expectations are high.

Last week’s episode dropped some bombs of its own that set things up nicely for the next few weeks ahead. Nico interviewed for a job at another hospital after potentially ruining his relationship with poor Levi. Meredith told her kids about DeLuca, which is kind of a big deal because they were never told about Meredith’s other partners since Derek’s death. Amelia has some clarity about her relationship with Link and they actually seem to be on a healthy road right now. And Jo threatened to leave Alex if he ever investigates what happened when she met her birth mother. A lot has been going on and I have a feeling the final three episodes of the season are going to either make or break some of these favorite couples.

Grey’s Anatomy showrunner Krista Vernoff and co-executive producer/writer Elisabeth R. Finch recently spoke to Gold Derby about the Season 15 finale and what’s to come for some of the characters. Finch revealed that Jo’s current arc wasn’t supposed to go this far, but now fans can expect her recent trauma related to meeting her birth mom to play out heavily for her over these final three episodes of the season.

Vernoff said during the interview that with the finale, they "took some big swings." Finch added that it was one of her favorite Grey’s Anatomy finales she has ever done and that "it’s unexpected."

Some of the more expected scenarios I can think of involve outrageous things like Izzie suddenly showing up at the hospital to see Alex or an unexpected pregnancy popping up out of nowhere. Maybe Maggie and Jackson, who just agreed to move in together, find out they are expecting, adding a little meat to their story that some fans who are still in denial about Jackson and April’s breakup can hold onto.

Or Meredith and DeLuca run into a bump in the road just as their relationship is starting to take real shape. I could also see things turning from bad to worse for Alex and Jo, who were in the worst place they have been at the end of last week’s episode. If the finale is going to be as bananas as Vernoff and Finch make it seem, then these next few episodes are crucial. Let’s just hope some couples make it out of Season 15 intact.