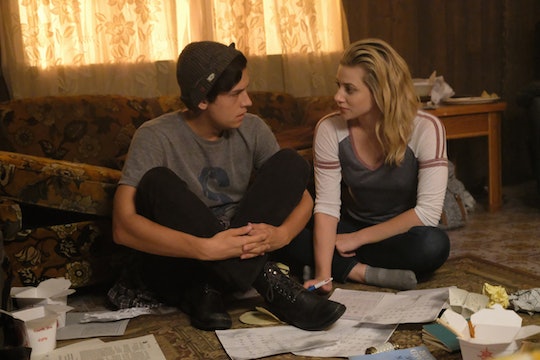 The Mystery Of The Black Hood Will Have To Wait Another Week, 'Riverdale' Fans

Just when we were getting somewhere with the Black Hood and Bughead, they had to go and say the dreaded "in two weeks" during the promo for what should have been Wednesday’s episode of Riverdale. So why isn’t Riverdale on tonight, you might be wondering? Instead of airing Season 2’s episode "Tales from the Darkside," The CW will be airing the first part of the iHeartRadio Music Festival that took place and was taped in September.

The network was originally supposed to air the concert in two parts, on Oct. 4 and 5, but in light of the mass shooting in Las Vegas at the The Route 91 Harvest Country Music Festival at the time, the network had postponed airing the iHeartRadio Music Festival, which had taken place in Las Vegas a month prior to then. At the time, in a joint statement obtained by Variety from both The CW and iHeartMedia, representatives said, "Out of respect to the victims of last Sunday’s terrible tragedy in Las Vegas and their families, The CW Network and iHeartMedia will be postponing this week’s TV broadcast of the iHeartRadio Music Festival. New broadcast dates will be announced at a later time."

Instead, The CW will air the first part of the concert Wednesday, Nov. 22 and conclude with the second part on Friday, Nov. 24. Of course this means that Riverdale fans will have to wait another week for a new episode, but as Season 2 hasn’t been lacking excitement so far, the wait will more than likely be worth it.

The decision to air the iHeartRadio Music Festival tonight rather than another night in the near future might also have something to do with the fact that it's the day before Thanksgiving. If you aren’t preparing to cook a feast fit for kings for tomorrow, you might be traveling or using the night off to go out with friends. The CW might have reasoned that with everything going on in preparation for Thanksgiving or in celebration of a long weekend ahead, there would be almost no point in airing a new episode of Riverdale.

For those who don’t know, or who don't drink so they don't really care, somehow the night before Thanksgiving has become the biggest drinking night of the year. Toben Nelson, a University of Minnesota public health professor, told the Star Tribune of Minnesota that because a lot of people happen to be off work for Thanksgiving, it’s become almost expected that the Wednesday before is a night to go out and drink with friends. "It’s a pervasive social expectation," Nelson told the newspaper. "These bars may be offering specials and they serve as a place to get together. Especially for folks returning from college who have recently come of age, it’s just a logical thing to do."

I mean, tell that to the 20-somethings who also need to stuff and bake a turkey at 9 a.m., but apparently it’s a thing now.

There was even a 2016 movie titled Drinksgiving that paid homage to the nickname some people have given to the day before Thanksgiving. Clearly, using this night as a standard bar-hopping night isn’t going anywhere anytime soon, and if you’re out trying to drink your BFF under the table with some kind of Thanksgiving shooters, you certainly won't be home to catch the latest episode of Riverdale, no matter how much of a huge fan you might be.

And overall, traveling is probably hard enough on the day before Thanksgiving, let alone traveling in time to be able to watch your usual Wednesday night shows. While it might not be the worst travel day out of all of the travel days of the year, according to USA Today, it at least ranks with the top 10 worst travel days, which isn’t really surprising. Even if you aren’t traveling by plane, you can expect some busy and backed up highways, so it's more than likely that The CW gets that watching your favorite TV shows live might not be high on your priority list. At least for this week.

None of that makes it any easier to miss another week without Archie’s shoddy detective work or Josie’s music with her Pussycats. But at least it’s another week to pour over the latest Black Hood theories and prepare for the next couple of episodes leading up to what will surely be an exciting Riverdale winter finale.