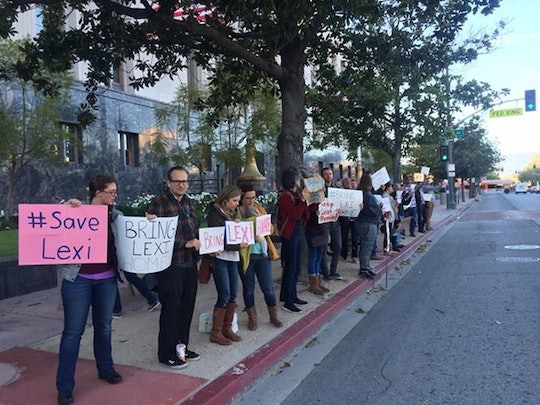 Why Lexi Should Be The Focus Of The "Save Lexi" Campaign

I saw a lot of tears on Monday. Tears in the eyes of Rusty Page as he relinquished his foster daughter Lexi. Tears in the eyes of Summer Page as she held the hands of her three children and watched Lexi go to her extended biological family far away in Utah. Tears of the three de facto Page "siblings" in Lexi's life as they watched, scared, and confused, and heartbroken. Media outlets everywhere have covered her biological father's alleged flaws, her foster family's history of attempted adoptions — but what about Lexi? Why isn't Lexi the focus of the "Save Lexi" chaos?

For those of you following the story, I'm sure you know what's happening. You know that the Page family has been raising Lexi for four years. That they say she considers them her mommy and daddy, that she is terrified of leaving the only family she has known. Rusty Page told media outlet ABC7 that Lexi called him "Superman" as authorities took her from his arms and begged him "Don't let them take me away."

A little background: Lexi is being removed to live with her extended family in Utah at the request of her biological father, reportedly in an effort to give the father more visitation opportunities with his daughter, despite court delays. Lexi's mother left her years ago, and her father (a member of the Choctaw Nation) has invoked his rights of "preferred placement preferences" under the Indian Child Welfare Statutes to have his daughter placed with relatives while he awaits answers and updates from the state. So we know what her father wants: He wants to spend time with his daughter. And we know what her foster family wants: They want to keep "their" little girl. We know the protesters who have been lining up in front of the DTLA Courthouse want: They want to be heard. They want her to stay with the Page family — hence the "Save Lexi" campaign that has been all over social media.

But what about Lexi? What exactly is she being "saved" from? In some ways, it seems that there are tears being shed and conversations being had about what's "fair" — for the Page family, for Lexi's biological father, and for the Choctaw Nation. The discussion has centered on what's fair for everyone, except Lexi.

There's so much chatter in the media about who "gets" Lexi, like she's some sort of prize to be won. Like this is some sort of reality show, where the public gets to decide who wins, and who gets voted off the island. But shouldn't we be talking about making Lexi's life easier, and figuring out a way that all of these people who clearly love her in a million little can help her grow, regardless of where she might live?

According to the Choctaw Nation of Oklahoma, Lexi is being removed to a family she has known for quite some time. She is not being ripped from one loving family to go live with strangers, as her biological sisters are either living in that same home or in a neighboring residence. They argue that she will have the opportunity to spend time with her father, who has fought for his rights to see Lexi for years. They are taking great strides to make her as comfortable and happy as possible.

The Page family as well has argued similarly, saying that Lexi is loved and has everything she needs at their home, with her pseudo-siblings, and that taking her from their residence is a terrible thing to do. But what matters most about this is whether Lexi is comfortable — either at her family's home, or the Page's. Will the state actually step in and check up on her well-being? Will they ask her if she's happy, or will they, once again, assume they know how she feels?

This drama needs to end. All of these people who profess to love this little girl... they need to just love her, I think. They need to stay in her life, make sure she is happy wherever she ends up, and not make their wounds her problems.

So much of this case has been about emotion: Each side has used emotion to argue that its way is the right way, and that their respective ideas are best. But Lexi is fast becoming the larger symbol of a divisive issue, when in reality, she's just a little girl who deserves to feel safe and warm and cherished at the end of every single day, no matter where she lives.