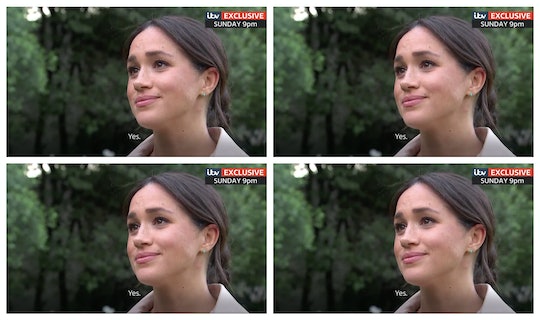 "Not many people have asked if I'm OK," remarked Meghan Markle in an ITV interview about the stress of pregnancy and new motherhood that went viral. Like so many, I watched the interview as a fan of the royal family, eager to get a glimpse into the life of the Duchess of Sussex. But then I watched it again and again, my heart breaking for Markle as she kept a pained smile on her face, nodding to reporter Tom Bradby's questions and offering polite answers that alluded gently to the shattering that naturally comes with having a newborn. The part where she thanked Bradby for asking her how she was feeling was what got me the most.

"Thank you for asking. Not many people have asked if I'm OK, but it's a very real thing to be going through behind the scenes," she told him, her eyes glassy.

And Bradby, bless him, knew what that meant. "And the answer is, would it be fair to say, not really OK? As in it's really been a struggle?" he asked Markle. "Yes," she answered without hesitation.

The thing is, nobody asks new moms how they're feeling. Even though the best case scenario is profound unease as people adjust to parenthood, and the worst is debilitating mental stress (and the challenges are more pronounced for women of color). It doesn't matter whether you have a toddler or a newborn or a fourth grader. Nobody asks.

When an older couple sees a mom struggling in a grocery store to keep her children from killing themselves in a display of pumpkins and two-for-one scarecrows, they don't ask her if she's OK. They offer a piece of advice — "cherish this time, hun!" — and move on with their day.

When you're in the hospital with your newborn baby and the nurses are coming in every hour to check in, rarely is anyone asking about you. When was the last time the baby ate? Has she pooped? How many diapers have you changed? When they do ask about your wellbeing, it's all very clinical and routine. Are you having any swelling? How many liters of blood have you lost this morning? Do you need more icepacks?

Nobody asks if you're OK.

When I called her, the first words out of her mouth were, 'Are you OK?' My voice cracked. I tried to say yes.

And when you're the Duchess of Sussex, when your husband is Prince Harry and has released a statement saying he's had absolutely enough of the tabloids ripping his wife apart, nobody asks if you're OK. Nobody stops by the palace gates with a tuna casserole and a fresh pack of Carter's onesies. Nobody dotes on the baby in the lace christening gown commissioned by the Queen of England and then asks you if you're feeling OK.

Watching the video over and over, I had two immediate reactions. The first was that I wanted to grab my coziest blanket, wrap Markle and baby Archie up in it, and sneak them away to my couch so we could watch re-runs of The Office and I could ask her every two seconds if she was OK and if she needed anything.

My second was pain at how much of myself I saw in Markle's eyes. I thought about leaving the hospital with my first daughter and coming home to an emotionally abusive and toxic home. How I was surrounded by people who wanted to hold the baby and take pictures, but nobody who asked me how I was feeling. I thought about the moment where I hid in my bedroom, trying to breastfeed this new little baby, and my ex-husband came in and said, "My mom wants to hold her." I thought about how I handed my baby over — because I felt like I had to — then called my own mom.

My mom was coming the next day to stay for a week. I only had to wait 24 hours. But when I called her, the first words out of her mouth were, "Are you OK?" My voice cracked. I tried to say yes. But my mom interrupted me. "Do you want me to come over?" I wanted to say no, I was fine. I didn't want to be a burden or to make her feel guilty. But instead I said yes. Much like Markle to Bradby. Much like every mom who has finally been asked, "Are you OK?"

Society so rarely extends that same unconditional love to the mothers.

It's a circle. I don't know much about Bradby, but I like to imagine that maybe he saw his own wife struggle, or has the sixth sense of fatherhood that alerts him when someone needs support. It's what mothers are somehow gifted with once we have a child to love — we suddenly know when our kids are not OK. We wake up in the middle of the night to check on them, and realize they're already awake from a bad dream. We watch them play half-heartedly on the carpet and realize they need to talk about some things. We watch them climb into their beds, and we just know that they need extra cuddles tonight. It's a "mom thing." Everyone knows about it. Everyone knows that moms are the benchmark for caregivers. Everyone, when they're not OK, wants their mom.

And yet society so rarely extends that same unconditional love to the mothers. Motherhood is strengthening and empowering and wonderful. Some of the greatest characters in literature are mothers, written so eloquently that it feels like they're not of this earth. We hear about the super strength of moms in situations where their children are in danger. We laugh about the sleepless nights and the dinners made up of leftover macaroni and cheese and talk about how resilient motherhood makes you. We talk about mothers as they get older and the legacy they have created for us — how grateful we are for the magic and care and love they poured into our childhoods.

I once read a quote that said a mother is someone who, upon learning that there's not enough pie for everyone at the table, suddenly declares she doesn't like pie all that much anyway. It's second nature, motherhood, and it's so much more than caring for a baby and loving a little person. It doesn't occur to Markle to keep a tally of how many times she's felt vulnerable during this season of life, or remember every hard moment so she can unravel it like a scroll to the first person who asks.

But when Bradby asked her if she was OK and she told him no, there it was — motherhood personified.

May we all be lucky enough to have someone ask us.

More Like This
The Morning Rush Is Parenting At Its Most Essential
Sex And Mom Guilt: When I Date Someone New, Am I Cheating On My Kids?
10 Ways Breastfeeding Is Good For Moms, Too
Dr. Jill Biden Just Delivered Some Frank, But Powerful, Advice On Motherhood