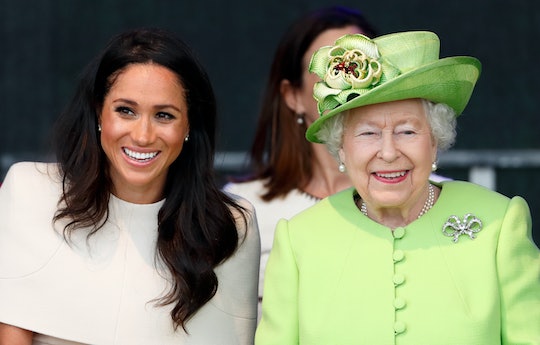 Shortly after the Duke and Duchess of Sussex debuted their son Archie to the world, the happy family posed for a lovely photo behind closed doors. Not only did that photo feature Queen Elizabeth II, Prince Philip, and Doria Ragland with the new parents, but a new royal biography has revealed that Meghan Markle was especially "proud" of Archie's first photo with the queen because of what it represented.

According to the new biography, Finding Freedom by Omid Scobie and Carolyn Durand, Markle apparently felt proud that the photo captured the queen with her first biracial grandchild. "The moment was later shared in a photo on social media," the book states, according to Newsweek. "All five adults around Archie, the first biracial grandchild of the Queen. The picture, taken by the couple's personal photographer Chris Allerton, was a hugely significant moment for the royal family. There, for the first time, was some much-needed visibility around race and inclusion at the heart of the monarchy." Markle, as the book reveals, told a friend "that made me proud," as Newsweek reported.

The black and white photo — posted to the Sussex Royal Instagram account on May 8, 2019 — shows Archie in Markle's arms. Her mother, Doria Ragland, stands beside her, while Queen Elizabeth II, Prince Phillip, and Prince Harry look on. The photo was taken on the same day Markle and Prince Harry posed for the first official photos with their son, two days after his birth on May 6. "This afternoon Their Royal Highnesses introduced Her Majesty The Queen to her eighth great-grandchild," the caption on the photo reads. "The Duke of Edinburgh and the Duchess' mother were also present for this special occasion."

It's important to note that Prince Harry and Markle were not an official part of this book; rather, the authors conducted 100 interviews with those closest to the couple, according to People. "The Duke and Duchess of Sussex were not interviewed and did not contribute to Finding Freedom," a spokesperson for the couple told People. "This book is based on the authors' own experiences as members of the royal press corps and their own independent reporting."

Even so, it would be easy to see why Markle would feel proud of this photo. As a biracial woman, she has written about her experiences with having a Black mom and a white dad and how it's shaped her identity. "While my mixed heritage may have created a grey area surrounding my self-identification, keeping me with a foot on both sides of the fence, I have come to embrace that," Markle wrote in an essay for Elle in 2015. "To say who I am, to share where I'm from, to voice my pride in being a strong, confident, mixed-race woman."

While the Queen has not been photographed with Archie since then, as least publicly, they've likely shared some sweet memories together. After all, a statement published in January, after Markle and Prince Harry announced their plans to step back from their royal roles, the Queen wrote that "Harry, Meghan, and Archie will always be much loved members of my family."