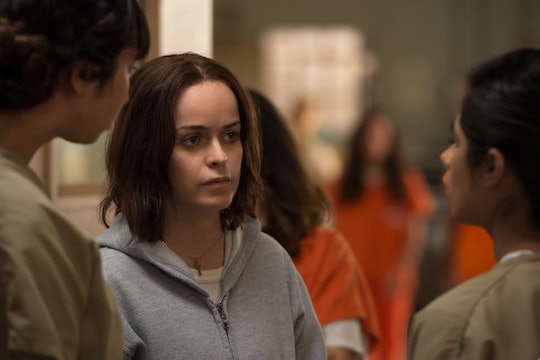 Like the majority of Netflix-watchers, I was more than excited for Season 4 of Orange Is The New Black. I’ve watched every previous season religiously, marathon-watching more than once to completely saturate myself in the hilarious, albeit heartbreaking, scenarios and the complex characters that bring them to life. While my adoration for the show continues, the show also presents numerous instances in which, well, watching is difficult. Like life, the thing I love most about the show is the thing I sometimes cannot stomach: it’s complicated. In Season 3 when Tiffany "Pennsatucky" Doggett is raped in the Litchfield van by prison guard Charlie Coates, I had to turn away, especially as she comes to terms with her rape and the many rapes she'd endured prior to being institutionalized. As a sexual assault survivor watching a rape play out on screen, then watching that rape be treated as anything but, I couldn't help but see myself in Pennsatucky's character. I couldn't help but see the reality I live with every day morphed into a story line on a show I admire. I couldn't help but see myself in Pennsatucky, which is what Orange Is The New Black as a whole does to its viewers: it creates characters who mimic the lives we've already lived, and it's why I both love and hate the show.

I thought the heartache of Pennsatucky's rape would end with Season 3, but that was a naive wish, because I know better. As Season 4 begins, we see Pennsatucky's ongoing struggle when she's forced to see her rapist on a regular basis. She comes to terms with the fact that what happened to her was, in fact, rape. As a survivor, I know the reality Pennsatucky is experiencing, because the lasting effects of rape do not end the moment the act does. No, these memories carry on forever, playing over and over again. They plague you and whisper in your ear and change you in ways you didn't realize were possible. After my own sexual assault, I couldn't go outside and I couldn't engage physically with my then-partner and I couldn't see anything other than danger and fear and pain in the world. At the same time, I had to constantly legitimize those feelings because, well, there wasn't enough evidence to bring my case to court. Like Pennsatucky, I was dealing with a man who didn't see his actions as "wrong."

My assailant was a former coworker, someone I knew and trusted, someone I'd worked with, laughed with, shared meals with, and drank with after hours. He didn't come from the shadows of the night. He didn't pop out as I walked home down a dark alley. He, like Coates, was someone I thought I knew. And, sometimes, during scenes on Orange Is the New Black, he's someone I can’t keep myself from thinking about.

The rape scene and the scenes that followed hit far too close to home for me. I was within and without, watching a show I love and admire while simultaneously feeling like I was outside of my body, trying to come to terms with the sexual assault I am still healing from. Even Crazy Eyes' fictional love story between two people (and four other people and aliens) couldn’t keep me from closing my eyes and tensing my entire body, pushing away the unapologetic memories of a night and an attack and the debilitating years that have followed since then.

Some viewers probably watched that scene and shook their heads in shock, unable to completely comprehend or even suspend their reality enough to believe that a man tasked with taking care of a woman would end up raping her. To some viewers, that scene was simply unrealistic. Others, like me, shook their heads in painful solidarity, sadly aware of the reality of not only Pennsatucky’s situation, but of our own. The inescapable reality is that one in five women who will victims of sexual assault during their lifetime. Maybe to other viewers, that scene was a representation of the real world. For me, that scene mirrored my own sexual assault. My assailant was a former coworker, someone I knew and trusted, someone I'd worked with, laughed with, shared meals with, and drank with after hours. He didn't come from the shadows of the night. He didn't pop out as I walked home down a dark alley. He, like Coates, was someone I thought I knew. And, sometimes, during scenes on Orange Is the New Black, he's someone I can’t keep myself from thinking about.

As I sat down to binge-watch the new season, I prepared myself for another array of light-hearted, ridiculous, dramatic, and difficult scenes, the ones only Jenji Kohan and the OITNB team can create. During episode 4, such a scene arrived. Coates — who previously lamented to a former coworker that Pennsatucky had been “distant” and “closed off” and “mean” to him since he raped her — confronted Pennsatucky to ask her what's wrong, and when she responds by asking him if he's having sex with the new driver of the van, he responds by laughing and asking if she's jealous. Though she denies any feelings of jealousy and said, “I just want to make sure you’re not raping her, is all," Coates seems taken aback — almost hurt — by the accusation. Even though Pennsatucky makes clear that what he did to her was rape, Coates rifles off the excuse:

But I love you. I told you that. And I said it when…When. I said it. So that makes it different.

But saying I love you doesn't make raping someone any different. It doesn't right your wrongs. It doesn't absolve you from your crimes. Pennsatucky knows this. She added, “But that didn’t feel any different.” And it's 100-percent true.

All too often, our society seems to only be comfortable calling rape by its name when it's committed by a stranger under the cover of darkness when a woman is sober and wearing multiple layers of clothing, just trying to get from point A to point B safely. We don't feel comfortable calling rape rape when it's committed by someone the victims knows or if the victim was drunk or if the victim was wearing something “promiscuous” or if the assailant is a white, young successful swimmer from Stanford. In these scenarios, consent — a very easy concept to teach and comprehend — becomes blurred and debated and victims are blamed for their attack while their alleged attackers are vindicated.

When Coates, for the first time, is called a rapist by his victim, he just can’t understand. To him, consent isn’t about two people mutually and emphatically saying “yes” to sexual contact. To him, consent is telling a woman who refuses his contact that he “loves” her and not feeling bad about whatever happens next. If he feels something, if he wants to express something, if he wants to do something, then he deserves it. Consent, as far as men like Coates are concerned, only reaches only as far as their emotions do.

Aside from the dozens of personal reasons I was struck by this scene, I was reminded of how point-blank the point of it all is. Rape is rape no matter the context, and Orange Is the New Black is overtly clear about that. It doesn’t matter if an attacker claims their love should excuse their crimes, and it doesn’t matter if a victim was intoxicated or promiscuous or if they were a sex worker or if they knew their attacker. It doesn't matter who that victim was 10 years of even 10 minutes before they were raped. It doesn't matter if they've had one or 100 partners. It just doesn't matter. There’s no such thing as a “legitimate rape” and there’s no such thing as “non-consensual sex.” Sex, by definition, is consensual and rape is always legitimate, regardless of the circumstances that facilitated an attacker from carrying out an attack.

It was a moment that allowed me to wipe the tears from my eyes and feel a sense of renewed individuality, like the piece that someone took from me was, for even a moment, put back in its perfect place.

But perhaps what makes the scene even more powerful is the fact that Pennsatucky calls her rape exactly what it is: Rape. She stands up for herself and identifies her sexual assault without apology and without debate. To watch her stand toe-to-toe with the man who raped her — the man she's forced to see and listen to everyday during her incarceration — to tell him that he raped her and to tell him that “love” doesn’t make a difference was so empowering for me to see. She was able to say what I've been told I shouldn't. She was able to stand up to a man who represents power and strength and life and freedom, something so many survivors, myself included, find fleeting after our own rapes. Pennsatucky holds her ground, and it's a ground I can't help but feel is constantly falling out from underneath me.

I listened as my attacker told me we were both drunk and I "probably wasn’t remembering correctly" and that he didn’t do anything wrong, even though I told him more than once that he raped me.

It was a moment that allowed me to wipe the tears from my eyes and feel a sense of renewed individuality, like the piece that someone took from me was, for even a moment, put back in its perfect place. It was a moment that transported me back to a police department in the Pacific Northwest where I was asked to call my attacker with a detective listening on the line in an attempt to bait him into confessing because the rape kit and the witnesses' statements weren’t enough evidence to bring him to court. I listened as my attacker told me we were both drunk and I "probably wasn’t remembering correctly" and that he didn’t do anything wrong, even though I told him more than once that he raped me. Like Coates, he disagreed, emphatically professing his innocence.

But like Pennsatucky, my attack didn’t feel any different because of how someone chose to view it or label it. And for so many sexual assault survivors who are forced to live their attacks over and over again every time a person like Brock Turner is given a lenient sentence and victims are blamed for their assaults and a rapist argues their innocence because they “knew” someone or “loved” someone before, it will never feel different.