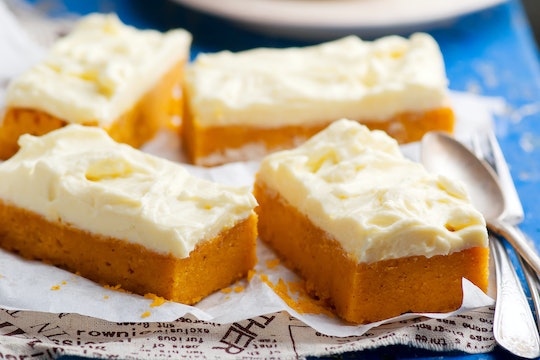 To every food, there is a season... and when it comes to pumpkin, that season is here again at last. Just like the first days of summer make you crave a giant soft-serve cone, when the temperature starts to drop and the leaves start to change, your cravings turn to pumpkin spice everything (from recently popular offerings like pasta to classics like pie). And while you certainly don't need an excuse, nursing moms actually have a valid reason to indulge... particularly in the case of pumpkin bars. So why are pumpkin bars good for breastfeeding?

If you're a nursing or soon-to-be nursing mother, you probably know what the word galactagogue means — but just in case you don't, a galactagogue is something that promotes or increases your breast milk supply. And guess what food falls into the galactagogue category? Yep, pumpkin. As reported by The Digestible, a blog run by San Francisco State University's Nutrition and Dietetics program, pumpkin has been linked to an increase in milk production for nursing moms. Even pumpkin seeds (also called pepitas) can be a beneficial addition to the average breastfeeding mom's diet, as Romper reported in a previous article: A good source of protein, pumpkin seeds are also high in fiber and iron (important for nerve and brain cell development), with one ounce of pumpkin seeds meeting half of the daily recommendation of iron for nursing moms.

So, obviously, pumpkin itself is pretty good stuff. But what about the other ingredients in an average pumpkin bar? Is there anything else in this ubiquitous autumn treat that your breastfeeding body needs?

Granted, not all bars are created equal. First, there's the traditional version (whether homemade or bought at a bakery), with the pumpkin cake-like bottom and layer of cream cheese frosting on top. Then there are the countless variations on this theme, from vegan to paleo to gluten-free and so on. The breastfeeding benefits of your bar will depend on the specifics, naturally.

So let's take the old-school cream cheese frosting variety as an example.

These Easy Pumpkin Bars with Whipped Cream Cheese Frosting from Mel's Kitchen Café might look like straight-up cake (yum), but they're packed with pumpkin purée. Plus, the addition of a little cinnamon will only help to boost your milk supply even more, as cinnamon is considered a galactagogue too, according to Science Direct (along with other aromatic spices including aniseed, caraway, cinnamon, dill, fennel, and fenugreek).

If you want to take your pumpkin bar craving in a less decadent dessert direction, these vegan Chocolate Chip Oatmeal Pumpkin Bars have pumpkin, cinnamon, and another ingredient you'll find in nearly every lactation cookie on the market: Oats.

"Folk wisdom has long touted oats' benefit on breast milk production," explained Parents, though research has yet to pinpoint the reason why the grain seems to work.

Whatever the cause, there's no question that these bars are better for you than most (not to mention a great way to beat those mid-afternoon energy slumps).

As for pumpkin bars you don't bake yourself, like the ones at Starbucks everybody was addicted to until they were discontinued (the pumpkin scone appears to be still going, at least), well... whether or not they're effective as galactagogues no doubt depends on how much actual pumpkin goes into them. (Oh, and FYI? There actually is a trace amount of pumpkin purée in a PSL, but don't expect any results.)

More Like This
10 Ways Breastfeeding Is Good For Moms, Too
Why Does My Baby Cough While Breastfeeding? Experts Explain
Does Pumped Breast Milk Have Antibodies? Experts Weigh In
How To Tell If Your Newborn Is Nursing For Comfort