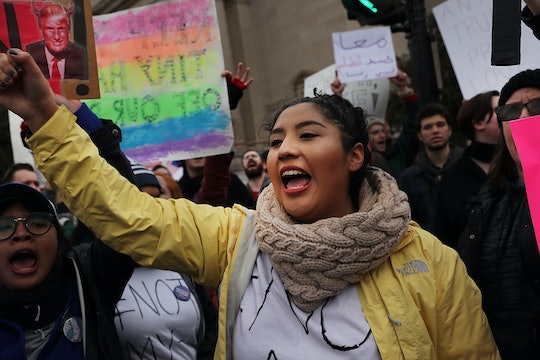 The Inauguration of Donald Trump has been a huge part of America's history, and not just because it includes electing a new president. As police officers used tear gas against one group of protesters and property was vandalized, many began calling the protests scary and unsafe, but it's necessary to know why the Inauguration Day protests are important, not violent as many have described.

It's the American way — it's freedom of speech. Although President Trump has been elected and is our new president, that doesn't mean everyone has to be on board with his presidency or his ideas and policies. According to Right to Protest, protests can inspire social change and make a huge difference in defining and protecting civic space. The Inauguration Day protests are a way to let those who are scared of Trump's possible policy enactments know that they have allies. The Inauguration Day protests give the people a voice, a chance to express their grievances, a way to be heard.

Although there have been violent moments in the Inauguration Day protests, it's dangerous to characterize all of the protests that way. According to The Washington Post, protesters clashed with police as the Inauguration Parade started and began throwing bricks, rocks, chunks of concrete, and even started a fire in the middle of the street.

But that's just one portion of the protests. That doesn't make everyone marching and protesting on Inauguration Day violent. This is in the same vein as arguing that Black Lives Matters entices violence or that all Muslims agree with radical Islam — violent acts can not characterize an entire group of people.

The Inauguration Day protests are important. People are scared, they are angry, and they are ready to fight. After losing the election, Secretary of State Hillary Clinton said there was more work to do. And for many, protests are a form of work. It makes people listen, it makes people stop and consider your point of view, and it makes them hear you in a world where the loudest voice in the room wins. Violence isn't the answer, but once incident amidst peaceful protests shouldn't define an entire group either.

The New York Times noted that there was a huge juxtaposition between the calm luncheon Trump was attending in D.C. and the violence in the streets, which mirrors a good portion of his election and time as president-elect. But the violence shouldn't push new protests away or make everyone fight against protesters. Instead, it should make people listen to the calm protesters even more and hear what they are fighting for, regardless of how others might act.