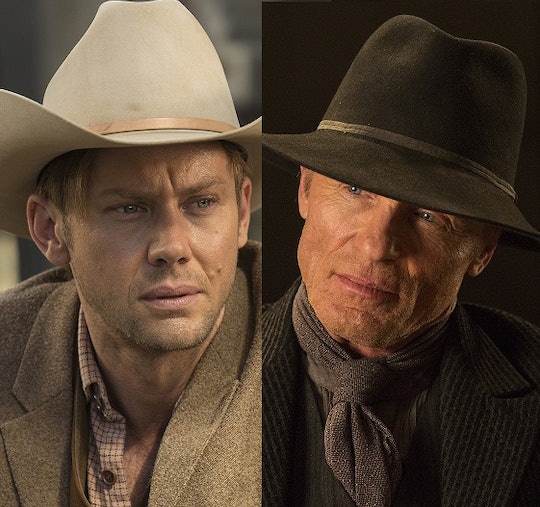 Why The Man In Black Isn't William On 'Westworld,' Disproving A Popular Fan Theory

One of the ongoing theories that keeps popping up in Westworld right now is that there are two timelines happening and that, in each of them, fans are seeing a different version of the Man in Black. In present day, he's the bad guy spending a month-long vacation at the park. In the past, he's younger, and he's William. But the show can be confusing enough, which is why the Man in Black isn't William on Westworld. Even if there are two timelines, these two men do not need to be the same people, and the theory can stand on its own without more factors thrown in to mess it up.

Taking the idea of the two timelines totally out of the mix, let's examine the proof that the Man in Black isn't William on Westworld a little further. Because while one of the theories can be accurate, there is no reason why the second part of the idea has to have any truth to it. While it would add another complex layer to a show that already generates new theories and questions with each passing episode, it would stand to reason that there might be even better storytelling in the idea that William and the Man in Black are two separate people. This would allow for many different storylines and dynamics to play out, and even enable the two characters to possibly come across each other at some point.

The Man in Black isn't William on Westworld, because he doesn't have to be, and believe it or not, there is actual evidence to theorize this claim.

While in some ways, it makes sense for William to be a younger, more optimistic version of the Man in Black, consider the possibility that instead of William being that important, he's there to merely provide viewers with an idea of what happened between Ford and Arnold, back when the park first opened 30 years ago. Viewers see increasing tension between William and his brother-in-law Logan, and in one of the past episodes, while that was happening, fans were also getting let in on some of Ford's story about how he and Arnold created the park.

Redditor caravaggio2000 points out that maybe the dynamic seen between Logan and William is just meant to be a reflection of the relationship between Arnold and Ford. William sees the hosts as something more, just as Arnold did, while Logan and Ford seem to view the hosts as nothing more than machines.

The Things Going On With Dolores Are Happening In Present Day

Viewers keep hearing about how haywire Dolores is going and how the engineers can't keep track of her. Then there's the fact that Stubbs mentioned how far Dolores has traveled from Sweetwater with William around the same time that he also approved the pyrotechnics request from the Man in Black. As Redditor xxcourtdawgxx points out, this seems to prove that William and the Man in Black are two different people. After all, Stubbs wouldn't be commenting on both of those things unless they were part of the same timeline.

It's All About The Adventure In The Narratives, Not Timelines

Anjin posted on Reddit that the only reason viewers are seeing both the Man in Black and William's storylines at the same time is to show fans how different narratives impact the guests and hosts as they journey through Westworld. The Redditor also points out that, somewhere down the line, it's going to be important for all of these characters to be separate entities so that they could potentially interact with one another.

This especially makes sense if the Man in Black is searching for the maze and if Dolores is also trying to find the same place. Then, it would be the perfect opportunity for these two stories to collide.

The Man In Black Is Important, But He Doesn't Have To Be Anyone Else

By now, it's pretty obvious that the Man in Black is important. One of the other guests broke character for a minute to commend him on his corporation out in the real world. Viewers have also seen Westworld employees let him do pretty much whatever he wants. On Reddit, MaineCoonKat predicts that the Man in Black could be the representative from the board who is supposed to be coming to check things out at the park. Ford does tell Cullen that he already knows someone was sent to the park, but that doesn't mean that he knows who it is.

Since watching the promo for the weeks ahead on Westworld, fans have been really into the fact that, at the 40 second mark, you can see William holding a knife that isn't unlike the one we just saw the Man in Black stab into the table in Episode 5. But instead of somehow proving that the Man in Black is William on Westworld, it could help in doing the exact opposite.

Seeing William handle the knife, if it is the same one, could mean that fans will finally see William and the Man in Black meet each other, proving false both the double timeline theory and the same man theory. In the promo, Dolores also comes face-to-face with the Man in Black, wearing the clothes she had on while with William as opposed to the blue dress she usually dons in her normal narrative.

If you find yourself questioning pretty much everything about the show, that's probably the point. But even if it sounds like a good, juicy theory, the Man in Black isn't William on Westworld, and you have the rest of the season to see how true that is.