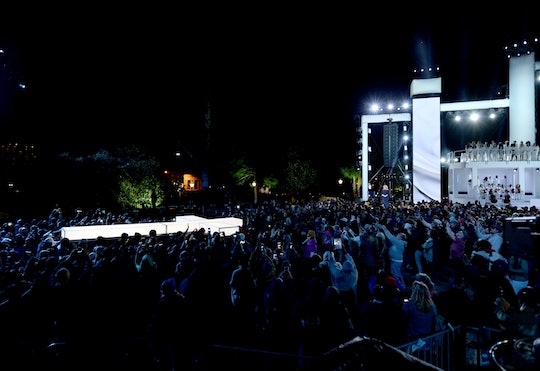 Why 'The Passion' Mattered To Me As A Black, Christian Woman

Fox's The Passion was a star-studded event televised all over the world, yet to me it felt as intimate and touching as if it were an Easter pageant given at any local church. Watching the story of Jesus Christ’s crucifixion and resurrection with who knows how many other viewers around the country felt like a unifying experience for me, a black Christian woman. Given the divisive political climate created by our current presidential race, senseless violence by the hands of citizens and police alike, and other racially and politically charged events, watching The Passion as a Christian black woman felt like a salve for me, soothing the wounds that have so dangerously sought to tear us apart as a country.

The communal feel of the production, accomplished by the live performance in front of, what looked like, a congregation of people and the theatrical presentation of the actors playing Jesus, Peter, Judas, and the rest of his disciples led to a more intimate experience than I thought. The congregation standing outside was a beautiful mix of black, brown, and white faces: Families wearing matching t-shirts, couples embracing, and tear-streaked faces watching Jencarlos Canela as Jesus saying goodbye to Peter, Judas, and the rest of his disciples, and Trisha Yearwood’s heart-wrenching solos as Mary. A multi-ethnic mass carried an illuminated white cross through the streets of New Orleans, and Tyler Perry acted as our pastor or congregation leader with anecdotes and humor geared towards a more enlightened thinking and modern-day understanding of the biblical story. Watching him truly felt like I was sitting inside my home church listening to an Easter Sunday sermon.

As a Christian, I think about Jesus' resurrection a lot, especially this time of year. And as I watched, I felt the sacrifice of God’s love for us all reflected on the faces of those in the audience, and I recognized their mutual belief and understanding of what God's love means to the Christian community. I can’t help but hope that those who call themselves Christians, yet spew and spit hate at political rallies, call out racial slurs at election rallies, punch protestors in the face, or fail to denounce an endorsement by the Ku Klux Klan, an organization founded on hate, murder, and death — the very antithesis of what Jesus died for — were watching this event tonight. I hope that they saw how everyone came together peacefully to celebrate The Passion, regardless of their personal beliefs. I hope that they understand what it means to be a believer, to love thy neighbor, to do and be good in the face of evil. I hope that they watched The Passion and felt a tugging at their hearts. Because, if anything, tonight’s show was an example of what a nation united could look like, an example of what people united in love could look like.

I believe that the true nature of people is what I saw on that stage and throughout that crowd. I believe in the love of Christ and the love of man, and that although we are surrounded by hate, divided by misunderstanding, and a lack of empathy, that love will still prevail.

Most striking about the New Orleans backdrop was the march through its streets where Fox's Nischelle Turner interviewed several marchers who joined in to carry the cross. The interviews were touching and representative of the diversity of experience in America. One of the people she interviewed was a white man, a military veteran who said that the “Procession [was] based on strength, rooted in love that is larger than all of us.” She also interviewed a black woman, a mother who lost her teenage son to senseless violence, someone who cited her “faith in God and Jesus,” as the reason for why she was out there tonight. And she spoke to many more very different individuals throughout the night, all of whom showed up for one purpose: to walk with the cross.

As a black woman watching the diversity of those participating in this event, it warmed my heart to see how we could all unite together in love. Immediately after the show was over, my local news began. The headlines were the same: a local police officer shot in friendly fire when a suicidal man decided to gun down the police station, presidential hopeful Donald Trump harping on again about building a wall, and a man being violently stomped and beaten inside one of his rallies. My momentary period of joy, love, and peace, came to a jolting holt.

But I am not pessimistic. Tyler Perry said tonight that scientific methodology teaches us to first witness then believe. And, in some ways, I did witness what I believe. I believe that the true nature of people is what I saw on that stage and throughout that crowd. I believe in the love of Christ and the love of man, and that although we are surrounded by hate, divided by misunderstanding, and a lack of empathy, that love will still prevail. I have faith that it will be that way. I am hoping that I will see my beliefs come true.