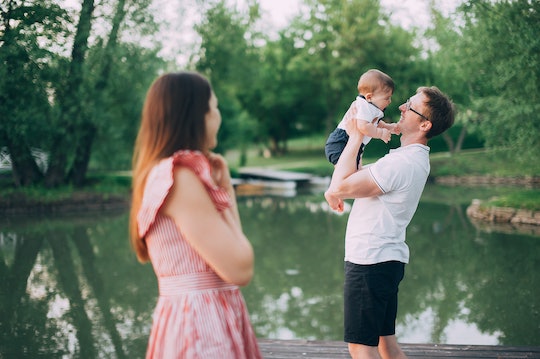 Why The Term "Co-Parenting" Helps All Families

From news headlines and bestselling books, to television shows and films, the ways that “moms” and “dads” are portrayed are often heavily influenced by heteronormative notions of parenthood and family dynamics that are, at best, antiquated and exclusive. As a result, some people, often unwittingly, associate certain tasks and duties to parents according to their identity. Which is why the term "co-parenting" benefits all families, regardless of how those families are comprised.

Instead of relying on intrinsically exclusionary language that makes it far too easy to label one parent (usually female-identifying) as the "designated parent," describing child-rearing as "co-parenting" helps ensure that everyone tasked with raising another human being will be given equal treatment... and equal responsibility.

It’s a great start, to be sure. But in an ideal world, gender neutral restrooms would be everywhere, equipped with changing tables ensuring access for parents of all gender identities. And in an ideal world, the idea that a dad would need to change his child's diaper as frequently as a mother, would be engrained in our society's basic understanding of parenthood. People would know that dads change diapers because parents change diapers.

The language of co-parenting is inclusive and free of gender-based stereotypes; stereotypes that pigeonhole cis women into being the predominant caregivers while cis men are free to design their lives as they see fit.

Consider the common phrase, "maternal instinct," and the picture becomes even more clear. Not only is the idea that women are natural nurturers — with a biological impulse to be better caregivers — a myth, it erases centuries of great parents of varying gender identities. It also fails to take into account the fact that some people with uteruses never plan or and don't want to have children.

Sarah Gibbens, writer for National Geographic, explains that "social structures have also played large roles in our modern understanding of maternity," and the same goes for issues related to parenting and caregiving in general. The conditioning starts early, too. Dr. Amy Blackstone, PhD, a professor in Sociology and the Margaret Chase Smith Policy Center at the University of Maine, wrote in a 2017 article for HuffPost, "What we think of as maternal instinct comes from our culture rather than our nature. Children – and girls in particular – are taught from a very young age that one of the most important things they can do when they grow up is become parents. A web search for girls’ toys and boys’ toys quickly reveals that parenthood is girls’ domain."

The common stereotype about parenting seem to perpetuate the idea that raising children is a task best reserved for moms. When we phrase the duties and responsibilities as tasks for parents who share the duties together according to their family's unique needs, however, the conversation changes. The language of co-parenting is inclusive and free of gender-based stereotypes; stereotypes that pigeonhole cis women into being the predominant caregivers while cis men are free to design their lives as they see fit.

Issues faced by parents and children don't exist in a vacuum, and are a direct result of intersecting social structures.

Initiatives like the Love the Change campaign, that explicitly address how gendered expectations impact access to necessary resources for parents, highlight why it’s important to take the language we use to discuss raising children seriously. When someone uses words like “mom” or “dad," certain images come to mind that are, for some people, informed by stereotypes about motherhood and fatherhood; stereotypes that perpetuate outdated ideas about families and who should be responsible for what. When we use words like “co-parenting," however, a much more inclusive picture emerges.

While co-parenting is often used to describe an agreement between two parents who are no longer romantically involved (or something similar), the term is also used when describing people who are doing exactly what the name suggests: parenting together. Raising children as a team. Sharing the duties and responsibilities that parenting requires with the help of someone else.

There are, of course, other definitions for “co-parenting” that are just as valid and used by parents to describe how they, along with partner(s), raise children. Some people even turn to websites and online forums to find other people interested in “intentional” or “elective” co-parenting in hopes of starting the parenthood journey.

Whatever the reasons and methods, co-parenting is essentially just another way of saying sharing the duties of parenting with at least one other person. It takes away any gendered expectations and stereotypes and focuses on the important elements of parenthood. At face value, the term co-parenting means to "bring forth" or "produce" "together" or with another, etymologically speaking. If you consider the literal definition of the term coparenting, outside of the confines of gender-based expectations and stereotypes, it offers a way to think about parenting that centers what matters most: the task of raising a child.

By turning away from terms and phrases that perpetuate gender roles and outdated notions about what moms and dads are supposed to do, we can change narratives about parenthood. Could co-parenting be the language we use to describe all forms of collaborative child-rearing, and not just situations where the parents are no longer together or do not wish to be gendered? It could be... and it should be. Parenting is an act that, when experienced with someone else you're sharing duties with, requires many different types of labor. Since opinions about labor, and who's performing it, are shaped by social structures and cultural ideas, using language that is inclusive can prevent biases from creeping into our thoughts about that labor.

Could policy and legislation that impacts families across the country, be impacted if we talk about parenting in terms of shared duties, expectations, and responsibilities that are not in any way tied to gender? I hope so. Bills like the Reach Every Mother and Child Act of 2019, that seeks to "implement policies to end preventable maternal, newborn, and child deaths globally," could be more inclusive and address how other adults in a mother's life can directly impact the lives of them and their children. Sometimes fatally. Issues faced by parents and children don't exist in a vacuum, and are a direct result of intersecting social structures.

Being more mindful of how gendered expectations impact our lives as parents can start with the words we use to describe our behavior. When we include all families in the way we speak about parenthood, we can help ensure all families are being cared for equally.

More Like This
10 Parenting Lessons From Abbott Elementary That You'll Want To Write Down
Mila Kunis & Ashton Kutcher Reveal They Have An Open-Door Bathroom Policy
Here’s Your Guide To Paced Bottle Feeding
Widows Are Expected To Mourn Forever — How Do I Date Again Without Shame?