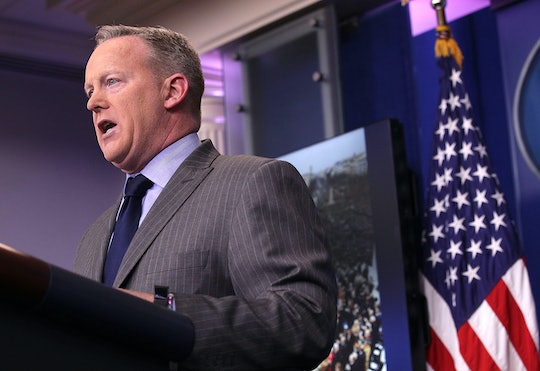 Soon after newly minted President Donald Trump mused aloud about how he believes himself to be engaged in a "running war" with the news media and announced "they're going to pay a big price" during a visit to the CIA's Virginia's headquarters Saturday, his press secretary also blasted journalists in strong and inaccurate terms. Sean Spicer leveraged his first occasion addressing the news media since his boss's inauguration to accuse reporters of trying to falsely diminish the size of the crowd that turned out for that event (they didn't), working to discourage unity among Americans (that's Trump's forte), and to generally unleash a slew of damaging (and easily disproved) lies. The proliferation of the unabashed, relentless cascade of falsehoods is one of the chief challenges of demanding accountability from the new administration — and just one of the reasons why Trump's first press briefing was so concerning.

"There's been a lot of talk in the media about the responsibility to hold Donald Trump accountable. And I'm here to tell you that it goes two ways," Spicer concluded in his tirade against the people whom Trump has labeled "scum" for reporting on things he actually said and did. "We're going to hold the press accountable, as well. The American people deserve better."

But even a cursory analysis of Spicer's four-minute attempt to discredit the truth tellers of the nation shows that the American people actually deserve much better than the barrage of lies Spicer, Trump, and the rest of the team routinely deliver.

Spicer's main point of contention with the media this time around revolved around the issue that has, apparently, burrowed itself into the Trump's fragile ego: the size of the audience that trekked to the National Mall for Friday's swearing-in ceremony. In response to the media reports that President Obama's 2009 inauguration dwarfed Trump's in turnout, Spicer spouted undeniably inaccurate stats about public transportation ridership in D.C. public public transportation ridership in an attempt to claim otherwise (hint: waaay more people utilized the capital's metro system on the day of Obama's first inauguration). He also asserted that white panels used to protect the grass "highlighted where people weren’t standing." That's just... well, decide for yourself:

Spicer deliberately packaged his grievances with the media in the context of one inaccuracy a reporter did tweet out Saturday: that a bust of Martin Luther King Jr. had been removed from the Oval Office. The mistake was quickly corrected in a followup tweet, in which the reporter that a Secret Service agent had been standing in front of it, but that didn't deter Spicer from labeling the reporter — and, by extension, the whole profession of journalism — as "irresponsible and reckless."

But while Spicer's dressing-down of reporters on day two of the Trump presidency was on its surface a warning to them, it actually served a greater, and even more nefarious, purpose. In keeping up with a tactic long employed by Trump during his candidacy and his time as president-elect, Spicer worked not only to compel the media to cow in submission, but to send a dangerous to the American people that it's the media, not Trump's increasingly authoritarian regime, that can't be trusted. That way, he will theoretically be able to (continue to) commit egregious offenses with relative impunity, because his followers will believe investigative reports are simply misleading or false hit jobs.

So, it's incredibly concerning to hear top Trump aide defend Spicer's lies as "alternative facts" on NBC's Meet the Press Sunday, although the notion what's true and false is not irrefutable but malleable. It sets up the groundwork for a society in which many citizens don't believe what's right in front of their faces, because they've been thoroughly brainwashed by a government that aims to exert unmitigated power and influence over them.

And now, Spicer has pledged to work around reporters whenever possible. "And as long as he serves as the messenger for this incredible movement, he will take his message directly to the American people where his focus will always be," Spicer said of the new president at the briefing. With the prolific Twitter account through which Trump communicates his every thought directly to his millions of followers, he has a platform to do this. That he can spoon-feed those willing to listen his own version of fact is a major threat to accountability.

In an encouraging move, though, CNN opted not to air Spicer's remarks live, instead reporting on what he said afterwards. This is an effective way to limit Trump's reach, while ensuring that Americans consume their news with the appropriate context and fact-checking in the face of an administration bent on saying anything it deems necessary to further its agenda.

Trump's team has proven that it will not accept facts as facts. The media must mobilize to combat this affront to democracy – and prove in the process that the reputation Trump, Spicer, and the like are trying to pin on them is wholly unearned.