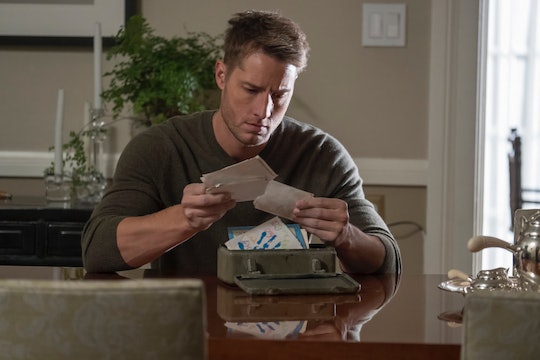 There are a lot of questions born from the This Is Us Season 2 finale, not the least of which is about those pertinent flash forward scenes. Randall’s seems like it's going to involve lots of tears and tissues though, so for the time being, it's probably safer to focus on what Kevin is going to be up to in the near future — especially since it's taking him out of the country. So why was Kevin going to Vietnam on This Is Us ? In the flash forward, he had a picture that shows Jack, his brother Nicky, and their friends from the time they served in the Vietnam War, so there’s no doubt in my mind that Future Kevin has learned something big about Jack’s past. Perhaps it also pertains to the mystery surrounding whatever happened to Jack's brother.

Earlier in the season, Jack took Randall to visit the Vietnam War Memorial in Washington D.C. and seemed to get emotional while looking at a particular name on the wall. (It was never confirmed, but I think we can safely assume the was Nicholas Pearson.) All signs seem to indicate that this means Jack's brother died during their time in the war. Maybe Jack was even there when it happened, further explaining why he doesn't like to talk about it. But is it also possible that his brother was deemed missing in action and they never found him?

In the flash forward, Beth’s cousin Zoey and Kevin are on a plane going to Vietnam, but it has to be for something bigger other than Kevin wanting to see where his father fought in the war. There’s not a lot known about Jack’s little brother, other than the fact that Jack protected him and took care of him when they were kids and, seemingly, while they were in Vietnam together as well.

Since a past promo for This Is Us promised viewers a look into Jack’s time in the military, then this could be where fans learn about what went down while he and his brother were stationed together. Since Kevin probably wouldn't travel across the world to simply see the country where his father and uncle fought, he may have tracked down a detail concerning his dad's brother. From what we know, the Big Three never knew Jack's side of the family in any capacity, so it would definitely be a point of interest.

It’s also not that inconceivable for Jack's brother to be alive and living in Vietnam decades after he was presumed dead or missing. In 2013, The Daily Mirror reported that a U.S. soldier was found living in a Vietnamese village, though he had been proclaimed dead decades prior due to his helicopter being shot down. According to the article and a documentary called Unclaimed, a U.S. veteran by the name of Master Sergeant John Hartley Robertson was held captive in a Vietnamese prison and upon his release, he married and had children with his nurse who had treated his injuries. In the documentary, the man believed to be the former U.S. soldier had no interest in returning to his former life or family. With that in mind, it’s definitely possible that Kevin will be faced with a similiar scenario during his little quest.

Maybe I'm getting ahead of myself here. Maybe Jack's brother really is gone and Kevin's reason for visiting Vietnam is strictly just to learn more about his father's past. But considering all the twists this show has thrown at us over these last two seasons, I wouldn't be too quick to rule anything out, and that includes Kevin coming face-to-face with his mysterious uncle.