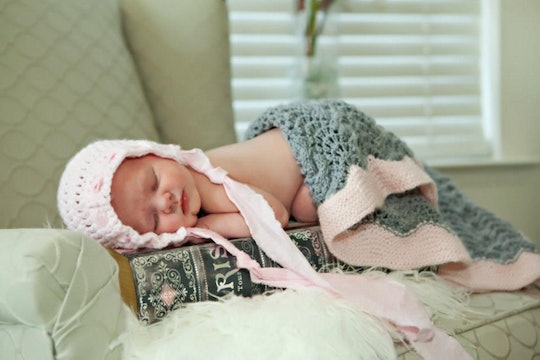 Why We Didn't Choose A Family Name For Our Baby

When I was a little girl, I always hated my name for some reason. Growing up in the era of Full House, I spent my elementary years being compared to Stephanie Tanner. I also happened to have a last name that rhymed with Bologna, so, “Step-on-me Bologna” was a very convenient moniker for my classmates to call me. Oh, how I cursed that name! I swore to myself that if I ever had kids, they would have a cool name, a unique name, a name that couldn’t be made to sound like anything else for the pleasure of mean-spirited children.

Of course, when I was a kid, I didn’t really think much about family names. I didn’t have one, my sister didn’t have one; it was something I didn’t think to consider. It wasn’t until I became an adult, got married, and eventually pregnant, that the idea would occur to me.

One of the biggest pressures during pregnancy for me was choosing my baby’s name. The name she would have for the rest of her life. I thought I would be excited, and to an extent, I was. But I also couldn’t help but think of all of the what-ifs that came along with choosing a name. What if my future adult child doesn’t get the job she wants some day because mom and dad went a little too far on the whole unique name thing? What if we gave her a name no one could pronounce and she spent her whole life correcting people and resenting us?

Even in the face of all those fears, I still wanted a name for my daughter that was unique and different, not one that had been passed down generation by generation.

I know many people choose family names, and they do it either out of tradition or honor. I respect that, but in choosing my daughter’s name, I wanted it to somehow be representative of her future personality. Not to knock tradition, but I've never been a fan of it. I associate tradition with guilting a person into doing something, even if they don’t want to do it, for the sake of upholding a long-held family belief, and that just doesn’t jive well with me.

My husband didn’t care much about tradition either, and we started combing through lists and lists of potential names. We had originally settled on the name Olivia, and oh, how I loved that name. There was just something about it that was so beautiful and elegant. But after we decided on it, something didn’t sit right with me.

For three days I pushed it to the back of my mind and tried to forget about it. Then, on the third day I took a nap, and I had the most amazing dream of my little girl. In the dream, I knew she was my daughter. It still gives me chills to think about it. She was older, twirling in a dress, and laughing and giggling with beautiful blonde hair. In the dream, I called her Sadie, and it felt so right. The ironic part was that the name Sadie had been in our top five list of baby names. Sadie is also Hebrew for princess, and my name, Stephanie, meant queen. It couldn’t be more perfect.

When I told my husband, he was apprehensive at first, especially since I had fought tooth and nail to get him to agree to Olivia. But I knew in my heart that it was wrong, and I ultimately convinced him Sadie should be her name. I don’t normally believe in this kind of stuff, but I could swear my daughter sent me that dream because she knew what her name should be.

Our daughter is now 2-and-half years old, and she’s a Sadie through and through: sweet and stubborn, just like her mother. So yeah, I get that there is great honor and tradition in giving your children a family name, but my daughter clearly had something else in mind.