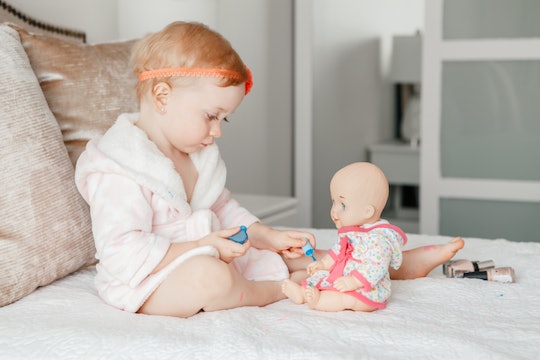 If Your Baby Seems Totally Freaked Out By Dolls, There Could Be A Good Reason

Playing with dolls, no matter what sex your kid is, can play a very important role in your child’s development. Their cognitive, fine motor, gross motor, and language skills are positively impacted, as are many other developing skills. But more on that later, because what if your baby wants nothing to do with dolls? You could end up saving hundreds of bucks at the American Girl store, but what does this mean for your kid? With all the purported benefits, you may be wondering why your baby doesn’t like dolls, and if you need to do anything about it.

Experts say that playing with dolls develops imaginary play skills and teaches about emotions and relationships, as explained on North Shore Pediatric Therapy's website. That's the cognitive piece. Your child’s fine motor skills will be honed by such actions as using utensils while pretending to feed the doll; even “self-care skills" are learned through "dressing and grooming the doll.” Under the umbrella of gross motor skills, “dynamic balance skills" are developed when your little one places a baby doll in a crib or rocks it while standing; pushing a doll's stroller is a good way to practice the "coordination skills needed for walking."

As with most things when it comes to children (and adults, really), the way kids interact with dolls is quite varied and individualistic, ranging from humorous to creepy, as I found out from polling a few parents online. One mom says her 2.5-year-old daughter is interested in them only for a few seconds, but prefers trucks and musical toys, and her 4-year-old son likes them for their facial features and to cart around with him. Another mom says her daughter always creates insane stories and scenarios with all of her various dolls, while another mom’s kid likes to mimic her own actions and be a “mommy,” too. One mom said her 23 year old is terrified of dolls to this day, because “she swears my porcelain doll came alive when she was 3.” Do all kids who don’t like dolls or are freaked out by dolls believe they came alive? Why do they think they're creepy? When can you expect your child to show an interest in dolls, and what does it mean if they never do?

I spoke with Maureen Healy, an expert on sensitive children and the author of Growing Happy Kids, about when we can expect babies to appear interested in dolls, and what draws them to dolls in particular. "Most babies appear interested in stuffed animals and some dolls between 12 and 18 months of age," Healy says. "At this developmental point they're often interested in pretend play and use these dolls or stuffed animals to participate in their play." So don't worry if your baby still isn't interested before their first birthday. Healy adds that you also shouldn't necessarily "worry" if they like dolls or not because "whether a child likes or dislikes dolls simply reveals his or her preferences. There is not necessarily a 'bigger issue' if a child doesn't like dolls."

"A child who consistently doesn't like traditionally feminine toys such as dolls maybe have more masculine energy and the characteristics associated with that," Healy says. "In my opinion, the goal is always to help nurture the child you have and encourage them to explore activities they're interested in — whether it's dolls or not."

If your child appears to be more than just not interested, but actually scared of dolls, what does that mean? Dr. Mayra Mendez, a licensed psychotherapist and program coordinator for intellectual and developmental disabilities and mental health services at Saint John’s Child and Family Development Center in Santa Monica, California, tells Romper that it could be all about associations made between the doll and what's going on around the child.

"A young child may dislike or reject a doll if they experience a pairing of negative or frightening sensations and emotional stimulation in the context of a doll," she explains. "For example, if while exposed to a doll a baby simultaneously hears a disturbing, loud, uncomfortable noise, the response elicited may be fear."

"Most fear responses in young children 0 to 3 years of age may be linked to negative processing of sensory experiences. Associations are made resulting in negative imprinting often with the tangible object such as a doll," she adds.

Your child may reject a doll for other reasons, too, such as when the doll is too large and overwhelming for them to tolerate, Mendez says. "Dolls that are excessively hard and cold, have harsh features, or make disturbing sounds may trigger distress in the baby and the natural response would be fear and withdrawal." In these situations, according to Mendez, the baby wouldn't feel safe when playing with the doll, and "the experience would be one of distress."

Though there are many, many benefits to playing with dolls, if your kid doesn't like them, Mendez says other toys can also promote "emotional regulation and development of empathy."

"A child that is not interested in dolls may still develop positive social-emotional skills, effective communication skills and functional adaptive skills with other toys, and more importantly, through nurturing and responsive human interaction (attachment and bonding with primary caregivers)."

"There is no substitution for secure bonding and attachment experiences created and promoted by the interactions between caregiver and child," Mendez adds.

So if your child doesn't like dolls or seems scared of them, don't stress. They could have a negative association linked to the toy, or the doll just might not be their thing, which is OK. They can still learn how to be compassionate, nurturing, and emotionally competent by attaching and bonding with you. As for the other motor skills they could learn with a doll, there are plenty, and I mean plenty, of other toys out there that can help them learn and practice the same things.