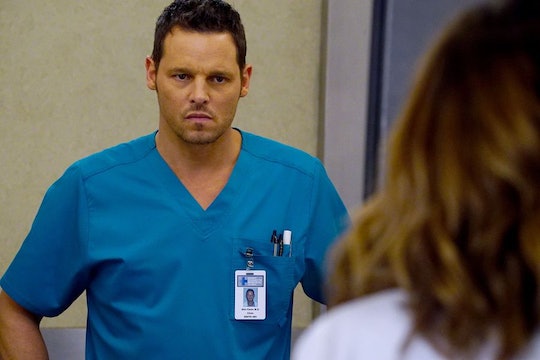 Will Alex Return To 'Grey's Anatomy'? His Fate Hangs In The Balance

When Grey's Anatomy ended for its winter break, Alex was considering taking the plea deal in order to protect Jo and prevent her from having to testify in court regarding his attack on Deluca. But if he takes the deal, Alex will automatically be serving two years in jail. So will Alex return to Grey's Anatomy? At first, he was determined to meet with the D.A. and take the deal right away, the night before the trial would begin, but as he sat in the waiting room, it looked like he was conflicted about the decision, especially after listening to Meredith's voicemail.

Taking the deal would mean that he protects Jo, but that he would likely lose his medical license and leave jail in two years a lot worse for wear. Actually going to trial, though, means he could still end up in jail, while also forcing Jo to testify, thereby potentially revealing where she is to her elusive husband, wherever he may be. So either way, Alex's fate on Grey's Anatomy depends on his testimony and whether or not he takes the plea deal.

Both options could mean changes for the show, and already Alex has been featured less, since he's been stuck working in the free clinic, so what's going to happen when Grey's Anatomy returns?

It seems kind of ridiculous for Alex to potentially throw everything away for Jo, but at this point, he might be screwed either way.

If He Takes The Plea Deal

If Alex takes the plea deal and serves two years in prison, how is he going to factor into the show? It wouldn't be totally out of the realm of possibilities to consider a time jump, just like they did when Derek died and Meredith left town for more than a year — and also when she was attacked and had to heal. The duration of that time was shown, but there were several time jumps throughout the episode to keep everyone up to speed and make it a little less of a shock.

Grey's Anatomy could do a time jump for Alex's jail time, if need be. Something tells me that if he takes the deal, fans aren't going to be seeing Grey's Anatomy from behind prison bars, so they're going to have to bring Alex back somehow, without making it seem too contrived. And since a time jump has already worked, it could be used in this instance too.

If He Goes To Trial

Literally anything can happen if Alex ends up going to trial for his attack on Deluca. In this case, there is still the danger of losing his medical license and thereby losing everything, but he still stands the chance of not getting as much jail time, if at all. Alex is one of the only remaining members of the original group of interns and he is currently Meredith's main "person," so if he leaves, I have to believe that he'll be back very soon.

Grey's Anatomy returns on Jan. 19, so fortunately (or unfortunately), fans will have a while to think about whether or not Alex is coming back.