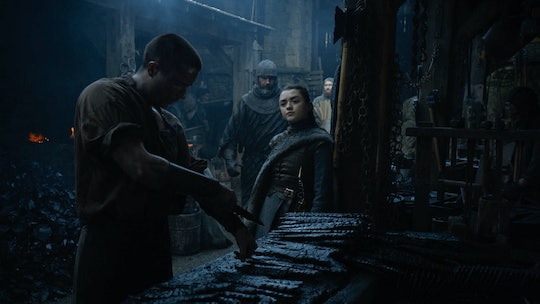 Game of Thrones fans have been speculating on how it all ends since well before Season 8 premiered. But now that the final season is almost halfway over, it’s time to consider the idea that maybe neither Jon or Dany will sit on the iron throne in the end. And this Reddit theory about Arya and Gendry ruling the Seven Kingdoms could be the true ending to the series.

According to Redditor sandstoneman, Arya and Gendry will be two of the only survivors left after the great war to come. The theory says that Arya and Gendry will be the only two viable candidates left to rule Westeros as they are both from noble homes and because Gendry has royal blood since he is Robert Baratheon’s son. The theory also says that instead of simply having Gendry rule the Seven Kingdoms alone, as kings have done for the past 1,000 years in Westeros, another throne will be forged from the weapons of all of the fallen soldiers like Jon and Jorah, to make another throne.

Gendry and Arya will then rule as dual leaders and as husband and wife. To make the theory just a little more bittersweet, sandstoneman wrote that Arya will also be pregnant as a result of her hookup with Gendry last week. "The show ends with a pregnant Arya flanked by the obedient and good Gendry on the throne," the Redditor wrote. "Sam, the Hand of the King, is working with them to form a new form of ruling to last 1,000 years."

As far as endgame theories go for Game of Thrones, this isn't the most outrageous or impossible one I have heard yet. There’s no doubt that we are about to lose some important characters in the upcoming Battle of Winterfell. Whoever is left after that will then fight against Cersei and her soldiers. But whoever is left after that battle will be there to pick up the pieces and rule the Seven Kingdoms. I doubt Gendry or Arya will die in the fight against the White Walkers, so I could see them both making it out of the next battle after their loved ones die.

The theory about Gendry and Arya ruling on Game of Thrones also says that Jaime will be the one to kill Cersei and that Tyrion will die in battle, which isn’t out of the question either. Sandstoneman also wrote that the Iron Bank will come for Jaime’s head since the Lannisters technically never paid them back, thus wiping out the Lannister family completely. And without them there to try and lay claim to the iron throne and with Dany and Jon having perished in one of the battles, Gendry and Arya could potentially rule as equals.

Maisie Williams, who plays Arya on Game of Thrones, spoke to S/Magazine about her final scene and it doesn't sound like the scene happened during battle in a brutal and bloody death. "When I came to shoot my final scene, I had already watched a lot of people wrap and seen all the tears and heard all the speeches," she revealed. "It was just a really beautiful day, and a really great final scene for me. It felt like the right time to say goodbye to Arya."

It does sort of support the Redditor’s theory that Arya outlives her remaining family members to potentially sit on her own iron throne. If Williams’ final scene was shot after she saw a lot of her co-stars shoot their own, then there might be hope for her making it out of the war alive.

I don't know where that leaves other fan favorites, like Sansa, who has been through too much to die now, or the Hound, who was like a second father to Arya. But if Arya and Gendry are at least alive when the dust settles, then the Game of Thrones ending won’t be all tragedy.