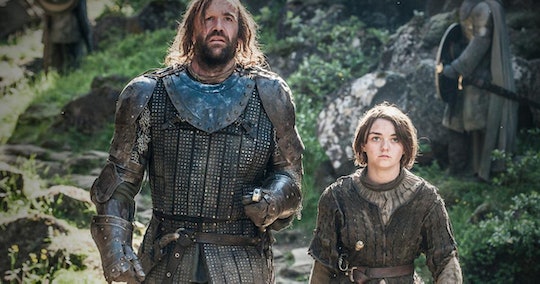 Will Arya & The Hound Reunite On 'Game Of Thrones'? They're Bound To Cross Paths

While Sunday's episode of Game of Thrones left some viewers feeling jipped and wanting much more than what was provided in the 60 minute episode, there was a silver lining beneath it all. What everyone seems to be forgetting is that among the boring, seemingly useless scenes, were two important characters who had major breakthroughs. With both Sandor Clegane and Arya out on the road again, on their respective journeys, you've got to ask yourself: will Arya and The Hound reunite on Game of Thrones? Let's think about this clearly, shall we? The last time we saw the odd couple together, The Hound was bleeding out and Arya was taking what little gold he had on him and leaving him on the mountainside to die.

Now, we all know well enough that he didn't die and is now probably in the best shape he's ever been in. And even though Arya spent two seasons too many in Braavos, a girl has learned a thing or two about fighting and surviving on her own and, as we saw in Season 6, Episode 8 of Game of Thrones, she's finally dipping out of Essos. In Episode 7, right before the Waif tried to kill her, we saw Arya paying a ship captain on her way back to Westeros, and even though she had a little hiccup in her plan, we have to assume that she will still make it onto that ship (or stow away on another) to go home.

Still, does this mean The Hound and Arya will meet again? They don't necessarily need each other anymore at this point, but neither has been out on the "road", so to speak, since they were with each other. And both apparently stayed put, learning from someone else a new way of living. Clearly, neither totally adapted to those new lifestyles, but let's humor ourselves here, and take a look at the evidence that Arya and The Hound will reunite on Game of Thrones.

Arya Mentions The Hound Multiple Times While In Braavos

During Arya's time in the House of Black and White, Arya trained with Jaqen to try and shed herself of her identity. While doing so, she tells Jaqen her story up until Season 5, basically a little Arya Stark refresher course. But while she's telling her story, inserting little lies to try and convince Jaqen that she can lie and eventually become No One, she says that she hated The Hound. Each time that she does, Jaqen whips her hands. Eventually he tells her, "A girl lies. To me, to the Many-Faced God, to herself."

Even as it was, The Hound obviously doesn't have a legitimate spot on her list anymore if you think about it. Sure, Arya left him to die back in Season 4, but was it to be merciless, or was it because she didn't want to be the person to actually kill him?

Both Have Had Similar Stories While Apart From Each Other

Granted, we only just saw The Hound again in Season 6, Episode 7 of Game of Thrones, but the way he and the Elder Brother told it, until now, he had been working with him, basically participating in Killers Anonymous meetings and doing lots of character-building exercises, like wood chopping. Likewise, until now, Arya has been working under her own mentor, Jaqen H'ghar, learning his ways to live a different life for herself.

While apart from each other, Arya and The Hound were doing their own things that were ultimately not the way either of them were meant to live their lives. Sandor "The Hound" Clegane is not meant to live a life of peace, and Arya Stark of Winterfell is not supposed to become No One.

They're Both Out On Their Own Again

As we know well enough by now, neither The Hound nor Arya's attempts at starting over worked out too well. Arya ended up almost killed by someone else training under Jaqen and The Hound didn't stand a chance once the Elder Brother and all of the other people he'd been living with were slaughtered. The ensuing ax frenzy was pretty much to be expected and brought The Hound back to his roots. He may not be a heartless killer again, but he has strength and brutality that can be used for good. Hopefully.

Now that Arya has denounced the Faceless Men and has decided to be Arya Stark again and be all, "Boy, bye" to Jaqen H'ghar, she too will be out on her own again. And if Arya reunites with The Hound, she has a new set of skills that can be used to kill those they come into contact with. Remember, she was almost a trained assassin.

Braavos Isn't Too Far From Where The Hound Probably Is

When you think about it from a purely geographical point of view, it is plenty possible that Arya and The Hound will reunite. In the map above, Braavos is at the northern most tip in the land of Essos, on the right. Directly across the Narrow Sea, in Westeros, is the general area of the Eyrie. And if you remember, that is roughly the same area The Hound and Arya were in when he fought with Brienne, who wounded him well and good.

Logically speaking, it is likely the same place The Hound was with the Elder Brother and their people, building the new sept, or whatever that tower-like structure was going to be. And with The Hound out on his own in that country, with Arya soon to cross the sea into the same (-ish) place, they're bound to come across each other again. Perhaps to share several chickens again?