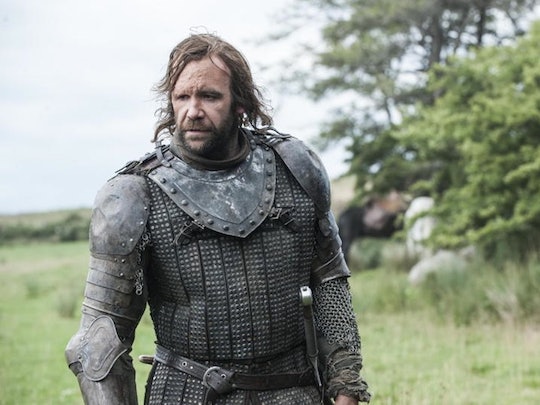 Where Is The Hound Going? 'Game Of Thrones' Fans Should Be Thrilled

He's alive! He's alive! The Hound is alive on Game of Thrones. And though that's a huge, huge relief, one question remains: Where is The Hound Going? Spoilers ahead, you guys. Like, literally in the next sentence. So stop reading now if you haven't watched Season 6, Episode 7 yet. Given that Arya's been stabbed, Sansa and Jon are in dire need of help, and Brienne is on her way to Riverrun to convince the Blackfish to fight for the Starks, I'd say now is as good a time as ever for The Hound to return — especially if Cleganebowl is going to happen and he's going to beat the sh*t out of his terrifying, Frankeinstein-esque brother, The Mountain, once and for all.

The end of Episode 7 of Game of Thrones found The Elder Brother dead, and all of the people with him slaughtered, likely by the three men from the Brotherhood who visited them the day before. Though we don't know for sure what, specifically, they wanted, they killed The Elder Brother and slaughtered everyone else in the camp as a result. (Though it doesn't take a Maester to figure out that they wanted food, supplies, and anything else they could scrap from them.) Thankfully, The Hound was far enough away to be spared. But now, where the hell is he going?

What I want more than anything is for The Hound to head to Braavos and kill Waif and save Arya. Unfortunately it's going to take way too long for him to get there (and let's be realistic here: Arya doesn't have much time and who knows if Arya will die as a result of her wounds), there's also the likelihood that The Hound could continue North and link back up with Sansa and co. Not totally sure she'd be excited to see him, but given that the Starks need every single body they can to take on House Bolton and regain Winterfell, I don't exactly think she'd turn him away at this point.

However, what's most likely is that The Hound is going to avenge the death of The Elder Brother by going after what's left of the Brotherhood without Banners. The Elder Brother rescued The Hound at the eleventh hour, and you can tell from their banter throughout the episode that the fact The Hound survived forged a deep bond between the two. Brienne and Arya may have left The Hound for dead, but The Elder Brother found him and since then, gave him life. It's not even remotely surprising that The Hound, who is a man of firm honor, would pay his last respect to the man who saved his life and avenge his death.

But here's hoping that in the process of doing so, he maybe sorta kinda sees Brienne, they smooth things over, and he heads to Winterfell to take his rightful place with the Starks. Lord knows they need it.