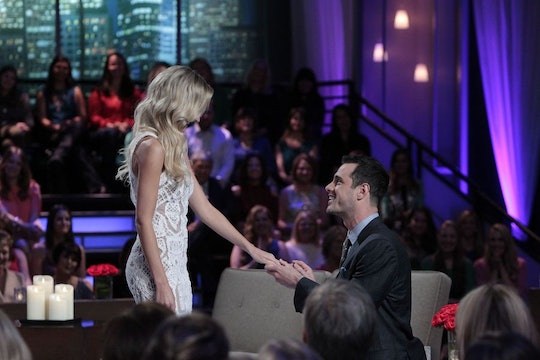 Will Ben Higgins & Lauren Bushnell's Wedding Be On TV? 'The Bachelor' Couple Almost Tied The Knot On The Finale

After 10 long weeks of the most dramatic season yet, Ben Higgins proposed to Lauren Bushnell on the season finale of The Bachelor. Even though they just went public as a couple on Monday night, I can't help but wonder what is next for the couple. The two have plans to move in together (soon), but what about their wedding? We all know Chris Harrison loves a Bachelor-themed wedding special, so it's not crazy to ask if Lauren and Ben's Bachelor wedding will be on TV, too. If it's worth anything, Chris certainly tried his best to goad the couple into it on the "After the Final Rose" special.

The scene was set for an impromptu wedding on Monday night's finale. Lauren B. just so happened to be wearing white (whether this was just a coincidence or not is TBD), jewelry designer Neil Lane was on hand with wedding rings, and production flew in both sets of in-laws. As if that wasn't enough, Ben's hometown pastor from Warsaw, Indiana was in the house, ready to perform an impromptu wedding ceremony in front of an audience full of fans who just wept over his breakup with JoJo. So romantic!

Ben expertly dodged the extremely elaborate plot laid out by Chris Harrison & company, who were clearly trying to hold Ben to his claim from the "Women Tell All" special that he was ready to marry the winner immediately.

"I think we both owe it to each other to do a wedding with our friends and our family," Ben delicately stated. "A big wedding, a celebration to cap off this craziness."

Both Lauren and Ben emphasized that they aren't into long engagements and want to get married "really soon," after they do a little IRL dating, in public and away from the cameras.

But Ben did indulge the studio audience with a re-do of his proposal, even though it wasn't entirely necessary — we literally just saw him propose 40 minutes prior. In his defense, Ben claimed it was so that he could involve and include Lauren's family, who was waiting backstage to surprise her. Most likely, Lauren was probably too nervous that Ben was going to dump her during the original proposal — making it sound like he was going to pick her, only to serve up the Bachelor "but" for maximum dramatic effect — to enjoy and savor the details of what Ben was actually saying. So, she got a second — significantly less stressful — proposal, certain this time that she was going to be his pick.

And, yes, Chris Harrison got to witness the whole thing first hand, instead of on a headset over a monitor in the jungles of Jamaica, which is how it probably went down the last time. And while Pastor Denny is probably going to officiating the wedding — if and when it happens — I bet Chris is still hoping to emcee the reception.