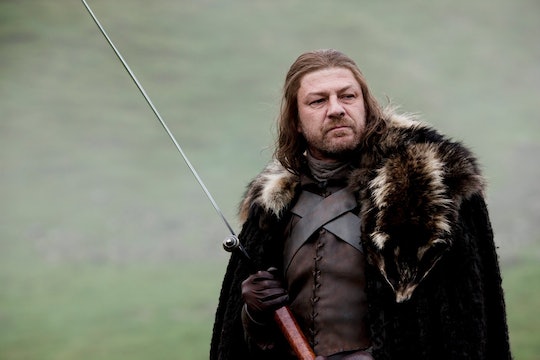 Will Bran Attend Ned Stark's Beheading On 'Game Of Thrones'? That Could Be His Next Stop

Watching Bran Stark travel through time during Season 6 of Game of Thrones has enabled viewers to not only see Ned Stark at the Tower of Joy, but also the history of Hodor. Ahem, Wyllis. But, if Bran can influence the course of history as he did in Episode 5, and if those in his visions can see him, it's not the craziest thing to wonder if Bran will attend Ned Stark's beheading on Game of Thrones. If you can wrap your head around the fact that Bran Stark is now a bona fide time traveler, a la his visions thanks to the help of the Three-Eyed Raven, then bear with me here.

If you remember correctly, when Bran's vision showed us the Tower of Joy, at one point he shouted for his father and what happened? Young Ned Stark turned around. Meaning that Bran can definitely interact with those in his vision time travels. It became even more apparent when he interacted with the Night's King in Sunday's episode of Game of Thrones and sh*t really hit the fan. So we now know that Bran can interact with those in the past, possibly even altering the present. But what if Bran has always been the reason for certain historical events?

Just sit down and keep your brain on, in the mindset of all things time travel. Because, essentially, that is what Bran is doing. But if LOST has taught us anything, it's that whatever happened, happened. If we see Bran interacting with characters in his visions, then in those scenes we see happen presently, he will have always interacted with them. Are you alright? Can you handle more of Bran Stark's time travel flashback vision ideas? I know, it's a lot. But it'll all be worth it.

Remember way back in the Season 1 finale of Game of Thrones when that idiotic King Joffrey ordered to have Ned Stark beheaded just for being real about the whole Cersei and Jaime incest thing? When young Arya was watching Ned Stark onstage, huddled next to that statue, Ned didn't see her. Then, the next time he looks up she's gone but he's still looking toward the statue in the crowd. So, what if Bran was standing by that statue, calling to his father for his attention again? And the last thing Ned saw was his son, from the future, witnessing his execution?

It should also be noted that the way young Ned turns around at the Tower of Joy when he seems to hear Bran call for him, and the way older Ned Stark looks up toward the crowd, are scenes that look so similar. It is obvious that when Ned Stark is rushing up to the Tower, he's stopped by Bran's voice, so if he seems to have the same reaction at King's Landing, then it only makes sense that he must be seeing Bran in the crowd, too, right?

If this is really what happened, what does it mean for the Starks now?Unfortunately, Ned Stark is still killed by the order of King Joffrey Baratheon, first of his name and yadda, yadda, yadda. But, if Bran Stark was there, calling out to Ned in the moments of silence, as Ned waits for the end to come, it's just more evidence of Bran being able to hardcore interact with characters in the past. And, at the very least, this means that when Ned was beheaded, Bran was with his father one final time.