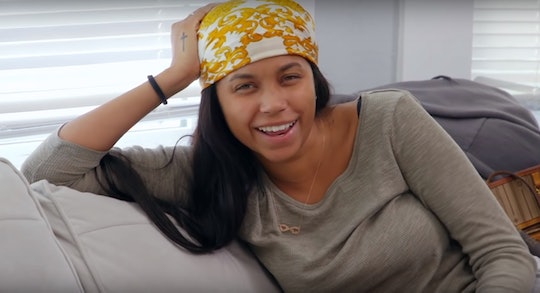 It’s hard to believe that 10 years ago, MTV premiered its first ever season of Teen Mom, which would spawn multiple spin-offs and make celebrities out of a group of girls who had been pregnant teenagers. Last season, Teen Mom OG introduced a new cast member, Cheyenne. She wasn't there from the beginning but she, too, knows what it’s like to be a young struggling mother. And with Season 9 here, fans might be wondering if Cheyenne will be back on Teen Mom OG or not.

After Farrah left the show before Season 8, producers brought Cheyenne and Bristol into the fold. They became regular cast members right away, but after the season aired, Bristol quit Teen Mom OG and afterward, some fans wondered if Cheyenne would follow suit. Where before the the show, newbies might have had some time in the limelight, being on Teen Mom OG and having an edited storyline likely brought new criticisms against them from fans. That has to be a lot to get used to. When it comes to Cheyenne, however, the newest cast member is sticking it out and she will be back on Teen Mom OG with the rest of the returning stars.

In May, Cheyenne posted an Instagram photo of herself with Maci, Catelynn, and Amber and confirmed that like them, she will be back on Teen Mom OG this season. Since her first season aired, she hasn't been openly negative about her experience or threatened to leave the show, so it's safe to assume that she feels as much of a part of the cast as anyone else and she could be in it for the long haul. Cheyenne and the other Teen Mom OG stars even went on a girls' trip together recently.

The biggest backlash Cheyenne has faced, however, are the claims from fans that she wasn't a teenage mom so she doesn't qualify to be on the show. Despite that, she told In Touch, she is still grateful to be part of the show and happy to be a permanent cast member. "I am happy to be a part of the TMOG family and congratulate the moms on their 10 years," she told the outlet. "It’s crazy that they have been telling their stories for 10 years and it’s a honor to have joined them."

Cheyenne added that even though she was 23 years old when she found out that she was pregnant with her daughter, she was still what she considered young for a mom with a newborn. She said that she wanted to use Teen Mom OG as a way to tell other young moms her story. And this season, she has a new storyline of her own to share with viewers.

While Amber continues the new chapter of her life with her second child, Maci deals with her ex Ryan’s rehab struggles, and Catelynn and Tyler work on their marriage, Cheyenne and her ex, Cory, have their own drama in the works. Last season, they went back and forth about being together and Cheyenne even ended her relationship with another guy because of her feelings for Cory. This season, however, Cory has a new girlfriend in the picture and that will likely bring some heavy drama to Cheyenne’s segments.

Cheyenne might not be dealing with the same struggles that her fellow Teen Mom OG cast members went through when they first became parents, but she is still on a journey that isn't easy. If she can reach just one fan with her story, then she will have done her job as a cast member. And as long as the show will have her, I don't think she’ll leave anytime soon.