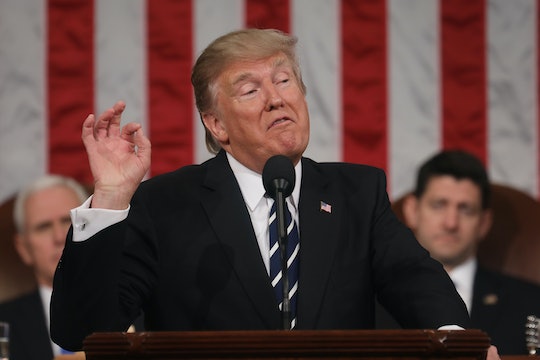 Donald Trump tends to ride out baseless accusations until the bitter end. And the day after the totally, 100 percent-unsubstantiated allegation that his predecessor has spied on him in Trump Tower during the presidential campaign flowed from Trump's fingers to Twitter in a characteristically unhinged-seeming rant Saturday, the White House has complied in ratcheting up the drama. On Sunday, Press Secretary Sean Spicer urged Congress to investigate Trump's claims that President Obama tapped his phones during the run-up to the election, even though the administration has not provided any evidence that the apparently nonexistent presidential overreach that Trump likened to Watergate ever happened.

In a series of tweets Saturday morning, the president described the "Terrible!" situation, which appears to be unequivocally divorced from reality, as he sees it. "Just found out that Obama had my 'wires tapped' in Trump Tower just before the victory. Nothing found," he alleged, explosively, in the first missive. And, then, later: "How low has President Obama gone to tapp [sic] my phones during the very sacred election process. This is Nixon/Watergate. Bad (or sick) guy!"

Obama spokesman Kevin Lewis soon condemned the statements as "simply false" in a tweet of his own. "A cardinal rule of the Obama Administration was that no White House official ever interfered with any independent investigation led by the Department of Justice," he wrote. "As part of that practice, neither President Obama nor any White House official ever ordered surveillance on any U.S. citizen."

The quick rebuttal didn't stop the story from dominating the weekend news cycle, though, somewhat eclipsing the ongoing controversy surrounding very serious questions about alleged contacts between Trump campaign advisers and Russian government officials believed to have worked to sway the November race in Trump's favor.

In fact, Spicer seemed to be employing a diversionary tactic when he implored House and Senate intelligence committees to pursue Trump's claims, which he did in his own string of tweets. Calling the reports "very troubling," Spicer requested, reportedly on Trump's behalf, that these congressional committees explore Trump's accusations as part of existing probes into Russia's interference in the election. But a complete lack of information related to Trump's accusation, the as-yet unmitigated dearth of proof, makes it hard to think about legislators' spending their time and resources trying to pin it down as any much less than ridiculous.

And that's not just the way it seems to your typical civilian with a non-expert's knowledge of how government-ordered wiretapping in the United States actually works. An unnamed former U.S. intelligence official dismissed Trump's claim that Obama tapped his phones in Trump Tower as "just nonsense," in an interview with CNN. "This did not happen. It is false. Wrong," the former official insisted, explaining that federal law stipulates that a judge cannot approve such a warrant unless there was evidence that its intended target — in this hypothetical case, Trump — had either committed a federal crime or actually was a federal agent.

Even more significantly, James Clapper, who was the director of national security under Obama and would have known about any activity to secure a secret court order to surveil Trump, denied that anything of the sort had taken place in a Sunday appearance on MSNBC's Meet The Press. "... There was no such wiretap activity mounted against the president, the president-elect at the time, as a candidate or against his campaign," he told host Chuck Todd.

And Trump's rank-and-file party members can't exactly fall neatly into lockstep with him in this one because of the lack of verification, even if they want to. "It would be more helpful if he turned over to the intelligence committee any evidence that he has," Sen. Susan Collins of Maine said, according to Politico, a sentiment echoed in some capacity by a number of her Republican colleagues as they made the morning show rounds Sunday.

Until he provides some evidence, though, it's a good idea to recall Trump's other recent smear campaign against Obama — the racist lie that he was not born in the United States — in evaluating the veracity of the wiretapping claims. There's certainly a reason there was never a congressional investigation into birtherism, after all.